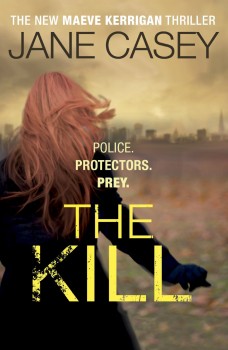 A killer is at large in London and police officers are being targeted. DC Maeve Kerrigan and DI Josh Derwent need to find the link between the cases before the body count mounts even higher.

When you run a review website, you receive a lot of books, and it’s great when one comes though the door that you can’t stop yourself pouncing on with unrestrained glee. Jane Casey’s books now fall firmly into that category. So when The Kill came out of its packaging, I had a great big smile on my face.

I’ve always been a sucker for bad boy characters and the gloriously obnoxious DI Josh Derwent is the epitome of a bad boy. He’s a man who constantly strives to live down to his reputation, and nearly always succeeds. DC Maeve Kerrigan, on the other hand, is a woman trying to succeed in what’s definitely still a man’s world. She has self-esteem issues and problems trusting people, even her police officer boyfriend Rob, whose good looks earn him quite a few snipes from Derwent, never a man to miss an opportunity for a barbed comment.

When news reaches the murder team, most of whom are off duty and celebrating a colleague’s wedding, that a police officer has been shot and killed, DCI Godley promptly sends as many of them back to the scene as possible, with Kerrigan having the joy of travelling with Derwent. By the time they arrive in Richmond Park, she wants to kill him, but there’s nothing new about that.

The dead officer has been shot with a high-powered sniper rifle, and that provides the perfect excuse to bring Derwent’s military background into play in a way we haven’t seen before, adding an extra dimension to an already complex character. For me, one of the strongest scenes in the book is Derwent’s reaction to having to impress the members of a gun club with his skill with a rifle. This hints at a backstory I’d dearly love to know more about.

The Kill gets off to a fast and brutal start and the pace never slackens. When more deaths follow in quick succession, each more shocking than the rest, it becomes a race against time to unearth the connection between the cases before the body count rises even higher. The dialogue is crisp, always in character, and a joy to read. Casey’s ability to weave in plot strands from earlier books without heavy-handed exposition is one of her many strengths, and this gives the series both depth and continuing interest.

Godley and the ambitious DCI Una Burt, who wouldn’t spit on Derwent if he were on fire, both play a strong part in the story, and Burt in particular is starting to be a force to be reckoned with. Kerrigan herself is a complex mix of strength and vulnerability, without the heavy-handed flaws and clichéd dark past that weighs down far too many main characters. Her relationship with Derwent is without a doubt the lynch-pin on which the books turn, and this is deepening with each outing.

Without a shadow of a doubt, this is a series I would dearly love to see translated to television. Fantasy casting for Casey’s characters is a great way to while away some time on Twitter. I'd like Richard Armitage for Josh!