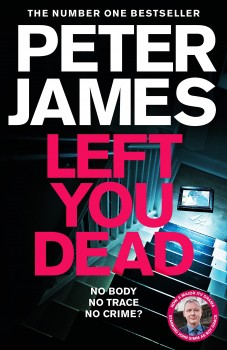 Detective Superintendent Roy Grace and his team encounter a deeply bizarre case where all the evidence points to a murder, but there’s no body to be found.

My co-editor and I are much-wedded to the rule that the only person who could use silly names in their crime fiction was the much-missed Dick Francis. We may, though, have to give Peter James a pass.

I spent the start of Left You Dead faintly distracted by the names Niall and Eden Paternoster. This may be because of being traumatised for life by an incident getting out of a paternoster (one of those moving series of compartments now outlawed on health and safety grounds) at the University of Leicester …

If you’ve never seen one before, go and look here. No self-respecting UK university was without one in the 1980s and 1990s …

OK, I digress. Once I was past the names, I was on firmer ground with the 17th book in Peter James’ Detective Superintendent Roy Grace series. This is one of the few ongoing sagas that still has me gripped, although the previous outing, Find Them Dead, left me feeling rather dissatisfied as the main character seemed to have been sidelined.

I can report that this has been remedied in Left You Dead. Grace and his wisecracking sidekick DI Glenn Branson are back centre stage and faced with a distinctly rum case where they’re convinced that a murder has been committed, but there’s no body to be found.

And that’s where Mr and Mrs Paternoster come in … They’ve done their usual weekend tootling around stately homes and then stop off at a supermarket to stock up on cat litter. Eden goes in to buy it – but never reappears, and there’s no sign of her on any of the security cameras. And the charmless Niall is definitely on the shady side of suspicious.

In a nutshell, it’s a did he/didn’t he set-up, but James, one of the best storytellers around, keeps the clever plot motoring. And the very scary ending will put you off going out on a dark night …

Meanwhile, there’s the usual sideshows that we associate with a James novel – his private life with wife Cleo and strange young son Bruno, problems for his loyal supporting cast of hard-working cops, and the malign presence of ACC Cassian Pewe looming over it all.

Except, Roy thinks he’s got evidence to bring down Pewe once and for all, and that hovers tantalisingly in the background during Left You Dead. And on the personal front there is a punch in the gut moment part way through that has left me not being able to decide whether it’s a genius bit of drama or a dirty great cop-out!

James is back to his imperious best in Left You Dead, with a plot that will keep you on your toes, plus a decent balance of the other ingredients that have made this series one of the strongest and most reliable police procedurals around.