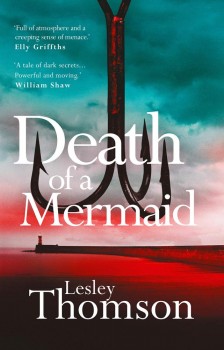 Frederica Power, known as Freddy, was banned from the family home and the town where she grew up by her strict and brutal Irish Catholic father when he discovered his teenage daughter was involved in a lesbian relationship.

More than 20 years later and now in an unsatisfactory arrangement with a wealthy and dominant criminal lawyer, she receives a message from her first love, a former classmate at a Catholic girls’ school, that her mother is dying.

In many ways it feels as if time has stood still in the Sussex coastal town of Newhaven. Freddy’s brothers now run the family’s successful fishing and sales business. The only thing that’s really changed is her once inseparable childhood friendships with Toni and Mags. After two decades of silence, the other two former members of their unique society the Mermaids – named for their love of the sea and their obsession with the Disney film The Little Mermaid – feel like strangers.

Toni, the wild, irreligious one with a penchant for shoplifting, is now a Detective Inspector in the town. She is also the lover of Freddy’s younger brother Ricky.

By contrast, Mags, obsessed by the life of Saint Julian of Norwich, the first woman to produce a book, Revelations of Divine Love, in the English language, has hardly changed at all. Mags, a librarian, devotes her life to her religion and to helping others – and was at Freddy’s mother’s side during her final illness.

Freddy is not planning to stay in Newhaven. But when Mags goes missing, old secrets – and passions – are reignited and she is determined to find her friend, even if it means facing the past and uncovering unpleasant truths about her family.

The murder of would-be Mermaid Karen Munday, once the school bully and the car crash death of her son, Daniel, Ricky’s crewman on his beam trawler Theresa-Mary, draws Toni into an investigation that could threaten her relationship and her career. But Mags and Freddy are little better off, Both have secrets they would rather have stayed hidden.

This clever standalone, which explores the ramifications of childhood experiences on later life and deals with issues of guilt, secrets and betrayals, is the product of the creator of the Detective’s Daughter series – Thomson is now on number eight.

Although Death of a Mermaid is slow to start, the book is original, full of sinister atmosphere and a creeping sense of menace. It is told in short chapters from the point of view of the main protagonists, Freddy, Toni and Mags, a device that works well, building the mystery, but offering different perspectives on childhood friendships and experiences of school days, as well as their very different adult attitudes to the church they were brought up in.

Death of a Mermaid has all the trademarks of Thomson’s previous work – clever plotting interspersed with gentle humour, well-drawn characters and an atmospheric evocation of place. While the story is credible if rather predictable and the ending a touch disappointing, this is still a great read for those looking for something a little different.