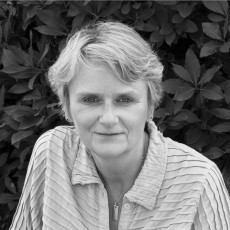 Lesley Thomson was born in 1958 and brought up in Hammersmith. She graduated from Brighton University in 1981 and moved to Sydney, Australia the year after. When she returned to London, she did several jobs to support writing. This included working for one of the first Internet companies in the UK.

Her first novel, Seven Miles From Sydney, came out in 1987 and made the City Limits top ten best books for that year. In 1990 she worked with actor Sue Johnston on her semi-autobiographical book, Hold onto the Messy Times. While completing an MA in English Literature at Sussex University Lesley wrote A Kind of Vanishing.

Lesley is a guest tutor on the Creative Writing and Publishing MA at West Dean. With Elly Griffiths, she runs a crime-writing short course there, and also leads workshops and takes master classes on writing crime novels.

Lesley lives in East Sussex with her partner and a raggedy poodle both of whom are treated to blow-by-blow accounts of scenes and twists in plot at any given time. She doesn’t know how they sleep at night.

The House With No Rooms

A chilling case for detective’s daughter, Stella Darnell, as crimes of the past echo in the present.