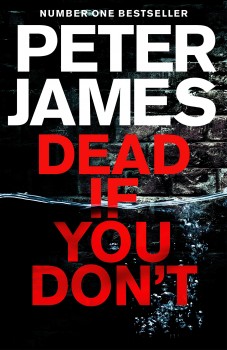 Peter James’s Roy Grace series is one of the few long-running sagas that I’m still deeply invested in. And it looks like it’s got the legs to keep going for some little time yet – each book plot seems just weeks after the previous one, so our hero isn’t 91 and the reader isn’t left wondering why he hasn’t been put out to grass.

The books are deeply rooted in Brighton’s bohemian town and capture every inch of the seaside resort, the trendy shops and the distinctly seedy side of things. And James is a meticulous researcher, who clearly has impeccable contacts in the police.  The knowledge he’s picked up comes across as absolutely authentic and there’s nothing so crude as an information dump in sight.

Detective Superintendent Roy Grace himself is a sane and reassuring presence. He’s a good cop, albeit with a slightly reckless streak to him when it comes to playing the hero, and has a supportive team around him. There’s not a lot of inking in of that supporting cast, with the exception of old-school plod DS Norman Potting, and my personal favourite, DI Glenn Branson. James is good, though, on the one or two-line pen portrait when we meet a new face from traffic cops in walk-on (or should that be drive-on?) roles to restaurant owners, indignant residents and some decidedly unpleasant enforcers.

Dead If You Don’t is the 14th in the series, and digs down into the migrant experience with the presence of Brighton’s Albanian residents – a number of whom you wouldn’t care to do business with. In the past it’s felt a few times as if James has had a tendency to bump off blonde women with complicated private lives. This time, though, it’s businessman Kipp Brown in the spotlight (and yes, we did meet him in a previous book entangled with one of the said blonde women!) He’s a compulsive gambler and is sinking deeper into financial disaster.

The book opens with Kipp taking his son Mungo to Brighton and Hove Albion’s first match of the season – and it’s a significant one, as it’s their debut in the Premier League. It’s destined to be an eventful match for several reasons. Kipp gets sidetracked by a client, and in that time Mungo disappears. When the kidnappers get in touch, they’re adamant that Kipp shouldn’t contact the police. He reluctantly gets Grace and his team involved and the book becomes the archetypal race against the clock …

If you’ve been with the series since the start, Grace is still dealing with the legacy of his missing wife Sandy, in the form of a strange young son he didn’t know he had. This plot thread takes a back seat in Dead If You Don’t, but it’s a dead cert that James will return to it in the future, based on some cryptic hints.

The seamy side of the city always puts me in mind of Pinkie and the cast of Graham Greene’s classic novel. Sorry, but I can’t resist saying that in James’s reliable hands, Brighton rocks!