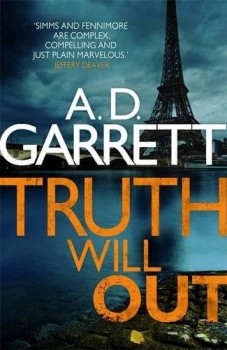 Professor Nick Fennimore’s public lecture on forensic science is secretly recorded and goes viral on YouTube. Unfortunately, it is unedited, judgemental, and shows the police, amongst others, in an appalling light of incompetence. Fennimore is back in the public eye. Old adversary, journalist Carl Lazko, starts hounding him to review another potential miscarriage of justice case. Lazko is the last person Fennimore wants to see, but inconsistencies pique his interest, and he reluctantly agrees.

Meanwhile, a mother and daughter are abducted in Manchester. And Fennimore receives taunting letters with evidence that link this latest kidnapping to the disappearance of his wife and daughter six years before. Fennimore contacts DCI Kate Simms, the woman he was with on the day his family was abducted. Torn by conflicting loyalties, Simms risks her career, helping Fennimore try to solve this latest abduction. When the mother is found dead, they know time is running out for the little girl. But can Fennimore stay focussed when he is receiving evidence that his own daughter may still be alive in Paris? And can he really trust his mentee, Josh?

This is the third book in the Fennimore and Simms story and although I hate to arrive late to a party, this is one I found enjoyable from the first page.  Garrett has deftly woven plenty of background into the story without slowing the pace, so even without the advantage of the first books, we soon get to know the main characters. Equally so, the intermittent chapters beautifully develop the victims of the recent kidnapping, Julia and Lauren Myers, and Lauren is completely believable as a child with ADHD.

The forensic science aspect of this story is well crafted, with no insult to intelligence or stretching of belief. At the same time, the details are not overly complicated. I learned without a feeling of being lectured to. I was also satisfyingly shocked by realistic turns of events, where second chances don’t always finish happily.

The story, with its twists and turns, is deliciously intense, and unlike many crime series, in Truth Will Out, the characters are as important as the plot. While the story comes to a satisfying conclusion, there are enough loose ends dangling for a fourth book. For lovers of crime stories that have a strong forensic element, and relations developing on a slow-burn, this is an excellent read.