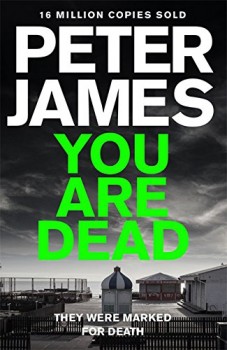 Peter James’s Detective Superintendent Roy Grace series has been one of the most reliable police procedurals around – and I look forward to a new book appearing every summer. Not that Brighton, trendy as it is, might always appeal to holiday-makers after you’ve read one of the books, especially if you’re a blonde young woman with long hair …

Over the course of the series, the body count has piled up – and that includes the police and their families. I am still suitably miffed at James killing off Bella Moy last time out. And we see her colleagues, particularly the eccentric Norman Potting, struggling to cope with what happened to her. Roy, meanwhile, has a new wife, sprog and home on the agenda – not that he’s around much to see any of them.

The book kicks off as it means to go on, with the abduction of Logan Somerville and an early introduction to the twisted mind of the baddie. And as Christmas approaches, Grace and his colleagues are racing against time to find Logan and the other missing women.

You Are Dead is exactly what you expect from James – slickly written, well-plotted and with some very creepy characters on-board. It’s not the best in the series, though, mainly because I’m sure we’ve had blonde young women abducted by a barking mad serial killer before.

But James slightly below par is stacks better than a lot of other writers supposedly firing on all cylinders. Realism crackles off the page when it comes to police procedure, and you know that he will have researched in minutely.

With the exception of the rather ghastly Assistant Chief Constable Cassian Pew (he and Roy have Past History – not all of which is known to our hero), Grace’s team pull in the same direction. And James inks in the supporting roles with careful detail – ‘Panicking Anakin’ tells us all we need to know about the divisional duty inspector! And I’m particularly fond of DI Glenn Branson, Grace’s best friend and sparring partner, who has had his own heart-break to contend with.

You can never accuse James of standing still with this series, which is now up to the 11th in the series. His main characters have grown and developed, and he’s pitched it about right with the ongoing saga of Sandy, Grace’s missing first wife. And he always delivers well-researched, sharply-written and faintly sinister tales that you’ll want to read in daylight.