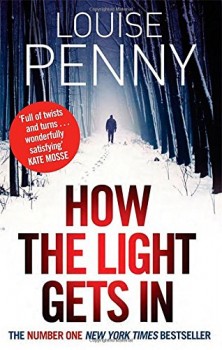 How The Light Gets In

Chief Inspector Armand Gamache of the Quebec Surete investigates the death of a quintuplet, and his battle with corrupt powerful people comes to a culmination.

Chief Inspector Armand Gamache of the Quebec Surete is called to the village of Three Pines, outside Montreal, by an old friend who is concerned that a visitor, Constance, has failed to arrive as planned. A search of her Montreal home reveals that Constance has been murdered. The dead woman is the last of a famous set of quintuplets, once feted across Canada and beyond.

Gamanche is, however, operating under severe constraints. His section has been broken up and dispersed, and most of his staff are new and often hostile. An operation to disrupt a terrorist plot ended with the near-death of his second-in-command Jean-Guy, who is now estranged from his former boss, addicted to pain medications, and in a poor state.

Gamanche is convinced his superior, Francoeur, is planning something terrible, but his resources are limited and the close scrutiny of his movements limit his freedom for action. Luckily, he still has a few reliable adherents, and several good friends in Three Pines, which provides a base from where he can get to the bottom of things.

For the majority of this book the author has to sustain a sense of menace and impending doom while giving readers a minimal amount of fact. The foiled plot at a dam was the central feature of a previous book in the series, but little detail is given here about what actually happened, and why an apparently successful operation should have led to the situation in which Gamache now finds himself.

Until the final chapters, little is said about Francoeur, and even less about the shadowy figure who is said to be the head of the conspiracy. Given that these are persons of wealth and renown, it is difficult to envisage what their motives might be for the creation of mayhem. Revelations as to what extent Gamache feels himself to be under scrutiny, and then to what extent such fears are shown to be justified, come very slowly. The reader therefore needs to take a great deal on trust for several hundred pages to get involved in the concerns of the protagonist.

Nonetheless, a palpable sense of foreboding is created and given emphasis by contrast with life in Three Pines, where everyone is incredibly perceptive, accepting, and supportive of others no much how they differ in age or lifestyle. Again, Gamanche and his team have a history here which perhaps is not fully appreciated by a reader coming fresh to the series, but to a cynic the sweetness and light bouncing around the village is a little too much to be credible.

Those who have enjoyed previous books in the Gamache series will no doubt welcome the satisfactory resolution of the dark forces ranged against him; the cold of a Montreal winter is convincingly depicted, and the final chapters are genuinely exciting as the uncertainties are finally cleared away. Some readers may feel, perhaps, that it takes rather too long to get there.