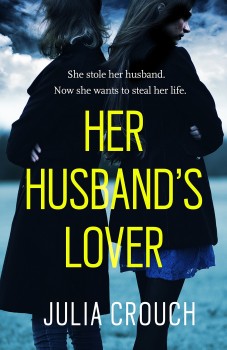 Louise is trying to move on from the horrific car accident that took her husband, Sam, and her children. But Sophie, Sam’s lover, is out to destroy Louise’s future.

Louise can’t even remember her name when she wakes up in hospital, until a girl, who turns out to be her husband’s mistress, tries to kill her. That disturbing incident marks the start of Louise’s road to recovery. Little by little the horrors of the fateful car crash that left her all but dead trickle into her memory. Sam, her husband, died as he drove his car into Louise’s. Although his death has finally freed Louise from his three-year tyranny, Poppy and Leon, her beautiful babies, are gone too. The only thing she has left is financial security.

After months of operations and intensive physiotherapy, Louise can now walk; slowly, painfully, haunted by her losses, towards a new life. She decides to sell Fen Manor, her rural home in Cambridgeshire, and buy an anonymous apartment in London. Although she doesn’t need the money, returning to work will help pick up the pieces. And reverting to her maiden name will make her as anonymous as her new home.
But she hasn’t counted on Sam’s mistress. Sophie, self-entitled and unstable, is screaming for revenge. Failed model, coke addict, uneducated and carrying Sam’s child, Sophie wants Louise to pay for taking Sam from her; with money, with the love-nest in Sam’s name, with her reputation and her life.

At an early stage in the book, one or two incidents slashed through the elastic suspending my disbelief. I actually said out loud, ‘Seriously?!’ But I pushed my incredulity to the back of my mind and ploughed on. I am so glad I did. What started as a doubtful story turned into a journey into the dark and chilling corners of two women’s minds. Two women traumatised by their personal stories and their need to survive.

The story hops between the points of view of Louise, Sophie and occasionally Louise’s new boyfriend, Adam. It also fluctuates between the present and the past. The constant character and time change, and a clever dose of ambiguity help the story to unfold at a bold pace. All writing is in the present tense, even the chapters devoted to the past, which sucks the reader in and prevents any feeling of having information dumped on one’s lap.

Adam, Louise’s ‘hero’, is rather too good to be true. It renders him weak and easily manipulated. But he serves the story well. The also-ran characters are three-dimensional enough to be believable, although a little stereotypical.  However, the minds and behaviour of Louise and Sophie are Girl On The Train messed up and skilfully portrayed, proving yet again a story can be compelling, even when the characters are not all sweetness and light.

There is a good balance of dialogue, action and introspection, all of which help to push the story forward to a dramatic end. And with twists and knots as sharp as barbed wire, be ready for a deliciously disturbing and uncomfortable journey.