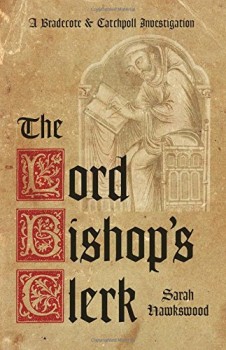 No-one is sorry when the Bishop of Winchester’s manipulative, spying, clerk is found bludgeoned to death before the altar at Pershore Abbey. But Serjeant Catchpoll, thief-taker to Worcester’s Sheriff, must discover who did it and why.

The publishers deserve a major success for their ambitious programme of introducing new authors, writing about tightly centred geographical areas – and with Sarah Hawkswood’s superb debut, may have found it.

She employs that oldest of literary and filmic devices – the buddy cop story – transports it to the violent mid-12th century when ‘God and His Angels slept’ while Henry I’s daughter and declared heir, the Empress Matilda and her cousin Stephen of Blois, fought for England’s throne, every major aristocrat tried to work out which would win, and no-one, man woman or child was safe from their marauding armies or bandits.

The buddy story relies on two protagonists of conflicting personalities forced to work together. One is often hot-tempered, his partner more stable. There is also a variation on the  ‘good cop-bad cop’ scenario, with one kinder and law-abiding, the other streetwise, an ‘old school’ enforcer who tends, at least, to bend rules and one who has been removed from his natural element or a novice.

Hawkswood exploits every possibly scenario and a large part of the charm of the book is the relationship between temporary Under Sheriff Hugh Bradecote, a decent and not unintelligent minor landowner, and Sheriff William de Beauchamp’s hardcase and wily, veteran thief-taker Serjeant Catchpoll. The two are never going to be buddies in the cloying American sense, but a growing atmosphere of trust and mutual respect for the other’s abilities promises well for future investigations.

The unlovely Brother Eudo, manipulative, spying clerk to Henri de Bois, papal legate and Bishop of Winchester, King Stephen’s brother but by no means his most ardent supporter, is found with his head beaten in in front of the altar at Pershore Abbey. Anyone who has come across him agrees it’s no loss, but de Beauchamp, who holds his office in the name of the King, despite favouring the Empress’ cause, must see that royal justice is done.

With his own deputy sickening, he seconds Bradecote, originally summoned to take part in the scouring of a group of bandits, to the task. Catchpoll is unimpressed, although he has seen his new superior in a clash of arms and knows he is both capable and brave. At first individually, then more often together, they set about examining a very mixed group of travellers who find themselves at the abbey. Two more killings increase the pressure, forcing them closer together despite mistakes and blank walls until they finally reach a bloody ending.

It may take a chapter or two for a reader to become fully immersed in the story, but it’s well worth the wait. A brilliant and realistic cast of minor characters build the tension – heightened by the fact that the action is completely contained within the walls of the Abbey, creating a claustrophobic feel, itself heightened by the situation outside, where no man can trust another and the highest in the land line up to change sides for the own ends.

Hawkswood’s previous work has been as a military historian – and how it shows with magnificent attention to period detail bringing 12th century Pershore and abbey life to the page in almost a scenic way. Her minor characters are completely authentic, from the bluff master mason with a secret to hide, to the beautiful and flirtatious aristocratic young widow, desperate to find a real man to allow her to fulfil her own femininity.

If there is a weakness, the killer was obvious to me from first appearance, but is made to merge so deeply into the background that the motive, when eventually made clear, seems perfectly natural in the strange and uncertain times in which the story is set.

All-in-all this is a clever, very well written and extremely enjoyable murder mystery. I absolutely loved it!