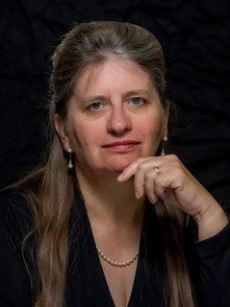 Sarah Hawkswood describes herself as a wordsmith, who is only really happy when writing. She read Modern History at St Hugh’s College, Oxford, taking Military History and the Theory of War as her special subject.

Her first job was writing educational material for Salisbury Cathedral and her first published book was From Trench & Turret: Royal Marines Diaries and Letters 1914-1918, which was a labour of love because her father, grandfather and great-grandfather all served in the Corps.

She turned to fiction when her children were in their teens and an empty nest loomed, and says that ‘her boys’, Bradecote, Catchpoll and Walkelin, have become so much part of her life that they are effectively real, just non-corporeal.

Her pen name is that of her six times great-grandmother. Sarah is married, with two grown-up children, and now lives in Worcestershire, which makes writing the Bradecote & Catchpoll series easier when planning their adventures. When not writing, Sarah has a passion for dressmaking (without the awful time pressures of the Great British Sewing Bee) and is a keen birdwatcher.

Undersheriff of Worcester Hugh Bradecote and his associates, the cynical Sergeant Catchpoll and his apprentice Walkelin must solve the mystery of who killed the unpopular and bullying manor lord Osbern de Lench and left his body stripped to its underwear.

When the widow Worcester’s undersheriff Hugh Bradecote is to wed is kidnapped along with a group of Benedictine monks, Bradecote must fight his fears for their safety to rescue them from a psychopath who kills for pleasure.

A wealthy horse dealer is found dead in a mill leat. He was stabbed, but not robbed. Under Sheriff Hugh Bradecote, veteran Sheriff’s Sergeant Catchpoll and his young trainee Walkelin face a series of mysteries as their investigations go far beyond the obvious to a web of greed, obsession and murder.

When the Prince of Powys’ messenger fails to reach his English destination, lord sheriff’s men Bradecote, Catchpoll and Walkelin must check a dead man’s identity.

A mysterious archer leaves a string of corpses in his wake as he leads attacks on the salt road from (Droit)Wich. When a local lord falls victim, the Sheriff of Worcester dispatches Hugh Bradecote and Serjeant Catchpoll to put a stop to the attacks.

Veteran Sheriff Sergeant Catchpoll must catch a 12th century arsonist who has set fires which have killed two people – and at the same time cope with a keen, but inexperienced, new Under Sheriff.

No-one is sorry when the Bishop of Winchester’s manipulative, spying, clerk is found bludgeoned to death before the altar at Pershore Abbey. But Serjeant Catchpoll, thief-taker to Worcester’s Sheriff, must discover who did it and why.