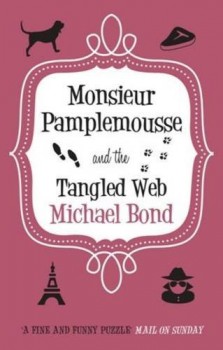 Monsieur Pamplemousse and the Tangled Web

Monsieur Pamplemousse and his loyal canine sidekick Pommes Frites investigate dastardly goings-on at a restaurant where the owner has turned up dead.

Michael Bond’s books have always played a large part in my life. I was brought up on the adventures of Paddington Bear, as well as the somewhat less famous tall tales of guinea pig Olga da Polga, so a move to crime fiction in the person of French restaurant inspector Monsieur Pamplemousse was very much a natural progression. But what I hadn’t realised until recently is that the series is still going strong.

In Monsieur Pamplemousse and the Tangled Web, the intrepid Frenchman, formally a detective with the Sûreté, receives an urgent summons to the offices of Le Guide, France’s premier guide for all things gastronomic.

Monsieur Leclerq, the proprietor, is - not to put too fine a point on it - in a bit of a flap and Pamplemousse is promptly regaled with a long litany of problems. There are reports of dastardly doings in a restaurant, where it is believed that the owner has been committing the heinous crime of showing customers a juicy, mouth-wateringly good steak and then serving up something more closely resembling shoe-leather. When the restaurant owner turns up dead, no one is particularly surprised or sympathetic.

On top of that, Monsieur Leclerq, proprietor of Le Guide, has received a delivery of an enormous, aromatic truffle, one of the so-called black diamonds of the Perigord region, which promptly and unfortunately disappears down the gullet of Pommes Frites, Monsieur Pamplemousse’s faithful bloodhound sidekick. Matters are further complicated, in true French style, by concerns about the Cosa Nostra, the inability to find a needle in a haystack in the Gare du Lyon and sundry other misfortunes. The web is indeed a tangled one.

For anyone who read and enjoyed Bond’s earlier creations the Monsieur Pamplemousse books are bound to hold appeal. They’re a delightful cross between whimsy and French farce, with a cast who wouldn’t look amiss in an episode of ‘Allo ‘Allo. The books have charm in abundance, sharp characterisation and gentle wit. It doesn’t matter a jot that this is something like the 21st book in the series. It’s never too late to join this particular party. So pull up a chair, open a glass of good French wine, and get to know Pommes Frites and his eccentric but sharp-witted owner.