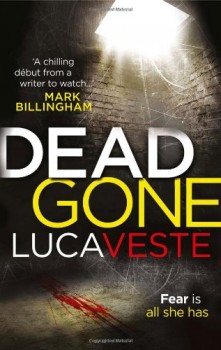 A young girl is found murdered in Liverpool, prompting an investigation which turns into a hunt for a serial killer when a second body is discovered, and a note that talks about experiments suggests there are more deaths to follow.

Eleven months after the disappearance of Jemma, a woman is found dead, a note pinned to her that talks of experiments and denotes her as ‘experiment three.’ Detective Inspector David Murphy, kept away from homicide cases following the savage murder of his parents the year before, is assigned to investigate what everyone believes will be an open and shut case of a drug overdose, the note someone’s bright idea of covering up an accidental death. But then a second body is found with a similar note, experiment four, and suddenly Murphy is on the hunt for a serial killer.

It’s a promising start, two immediate questions providing an intriguing hook: what happened to Jemma and to experiments one and two? The novel switches back and forth between Murphy’s investigations in the present, and Rob’s attempts to find Jemma in the past, and is well-paced and well written.

It’s just a shame that the author relies so heavily on so many clichés: the damaged cop on the verge of a mental breakdown, relationship in tatters, temper control hanging by a thread, getting yelled at by superiors for letting his emotions rule his mind, the rival detective waiting in the wings to snatch the case and the glory when Murphy finally becomes unstuck, only to unravel himself at the first crime scene he’s in charge of. Finally, there’s the Silence of the Lambs climax and the capturing of the villain that’s disappointingly predictable.

One of the more interesting plot threads, the murder of Murphy’s parents, is skimmed over and never really made a real part of the story, and there are characters who feel underdeveloped and under-used. The book feels like part of a series, with large swathes of explanation missing, and strands created but never taken to any conclusion.

Dead Gone isn’t a bad summer read, though, if you like your serial killers at the less gory end of the spectrum.