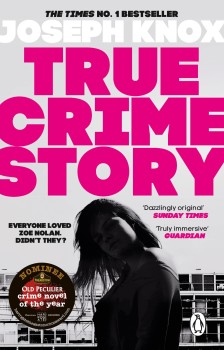 Zoe Nolan, a 19-year-old university student, walks out of a party in the shared accommodation where she has been living for three months – and is never seen again.

Jospeh Knox’s original standalone follow-up to his successful Aidan Waits series is told in almost a podcast format and reads like a cinematic true crime documentary. It deals with the disappearance of Zoe Nolan, a 19-year-old university student, who walks out of a party in the shared accommodation where she has been living for three months and is never seen again.

The number of possible suspects, a series of weird and unsettling events and the generally creepy atmosphere around Zoe’s university accommodation block make it clear there have been dark forces at work but the ‘who’ and the ‘why’ remain a mystery for years.

True Crime Story is presented like a transcript for a documentary with the story entirely told in interviews and emails between two authors, one of whom is Joseph Knox, himself a character in the book, but despite this, it is never entirely realistic. The interviewees are far too busy clearly lying or strenuously pushing their own points of view to be considered reliable. Trying to work out who is telling the truth, either as they see it or simply as they would like it to be to avoid suspicion falling on themselves, eventually becomes almost boring.

All the right ingredients for a hit are present: sexual fetishism, probably Britain’s most dysfunctional family – fractured to say the least, with secrets and lies, jealousy, obsession and ambition at its heart – plus two suicides, a background awash with drugs and a thoroughly downbeat and damning presentation of university life. But my main issue is that the story itself was just not compelling. The characters, almost without exception, were a caricatured bunch of varying nastiness and there wasn’t enough background or development for me to really care about what was happening to any of them.

Zoe is originally presented as the victim, but it’s never quite made clear what she’s a victim of, although abduction and murder are heavily hinted at. I was left questioning how a 19-year-old college student and part-time singer winds up with £77,000 in her bank account unless she was involved in either blackmail or money laundering.

The suspicions, fraught atmosphere and a massively botched investigation by Greater Manchester Police are well conveyed well, but for me the whole scenario was rather like being in the middle of a crowded room with people all shouting at once and only snippets of their conversations getting through. Despite Knox’s attempts to raise the stakes and the pace at the end of each chapter, he rarely succeeds and the eventual ending falls flat.

This is a very ambitious piece of work and I imagine far harder to write than a conventional crime story. But the multitude of complications and a basic premise that like an iceberg is more than two thirds hidden from view make it difficult to follow.