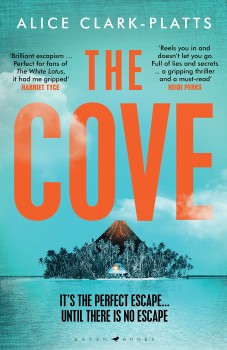 Two couples, each with two kids, go on an island holiday together. Tensions between them surface early and matters are tested further by island politics and monsoonal weather.

Should you holiday with a couple you don't know all that well? That's the question two British families, each with two kids, face as they wander from their homes in Singapore to enjoy a break on a Malaysian island together.

Lou is in the finance business and has a four-month-old baby, together with an eight-year-old son. Her husband, Adam, is an author. Noah is a wealthy lawyer who has eight-year-old twins with his wife, Eliza.

The couples have known each other for a reasonably short period before deciding that a break away together is a good idea.

It doesn't take long for each of them to display some unsavoury or unlikeable characteristics. Adam appears to have a roving eye as well as a keen interest in Eliza. Noah is obsessed with finding a wifi connection on a part of the island that doesn't have wifi. Eliza is still grieving the loss of her mother some time ago and reacting strangely to certain situations. And, finally, Lou is pill-popping as she has already determined that her marriage to Adam is over. Alcohol flows freely each time they meet. Their stories are told in rotating third-person accounts.

The cast of characters is not much wider, which makes it easy to follow the story. A trip with four or five couples and a greater number of interactions may have been more difficult to track. That said, of course, resort staff do play a role, as do other characters on the island. Lars is the resort manager, in effect, with a hand in most duties, including leading diving expeditions. Harry runs the local turtle sanctuary on the other side of the island.

The first major non-relationship issue to hit the group occurs on a diving trip they all take. There is an explosion, with no injuries or loss of life, which scares and then further strains them all. The use of dynamite for fishing purposes on the island is very controversial. This divisive view mirrors the view of tourism in general – some locals are supportive and others less so.

Matters escalate, as do tensions, when one of the men, one of the kids and one of the locals all go missing, all in separate incidents. The discovery of a body raises further questions. At around the same time, a large explosion occurs, Lars also becomes unreachable and monsoonal rains set in. Travel to and from the island at these times is often impossible.

Bubbling along with all of this is a major relationship issue which goes some way to explaining why the holiday is taking place at all.

To explain more would be to offer spoilers, so it is perhaps safest to say a smorgasbord of factors is present.

It is a little hard to classify the book, as there is a blend of mystery, murder mystery and then psychological thriller. I'm not sure I'd like to be friends with any of the primary cast, so the author has assembled some intriguing ingredients. That package kept me guessing possible developments throughout – for example, who, if anybody, will surface as a hero/ine, and who, if anybody, will emerge a little nicer than initially portrayed?

I wasn't blown away by how a couple of things unfolded as some obvious plot paths are not taken. It must be said, however, there is pace aplenty and no loss of reader interest as the relationships play out and external factors throw up ongoing challenges for the group.