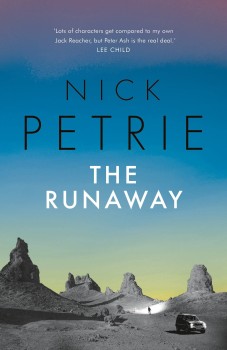 Returned war veteran Peter Ash helps a stranded woman and finds himself at odds with a man prepared to eliminate anyone who stands in his way.

Peter Ash is a US vet still grappling with PTSD after service in Iraq and Afghanistan. Close friendship with another vet, Lewis, and his girlfriend June, is helping, but relief from his demons is best obtained by a bit of action and he welcomes any opportunity to exercise the skills he developed at war.

Such a chance arrives when on a remote Nebraska backroad, he comes across a stranded pregnant woman. Helene is running from her husband Roy, and when their vehicle is surrounded by men with guns Ash realises that only by an immediate escape can he hope to stay alive. If he survives, he plans to rescue Helene, but Roy is ex-police and well equipped to stop him.

For most of the book, interleaved chapters follow Ash in the present, and Helene’s route to her current predicament. Helene is still a teenager and took off with Roy to escape a situation tantamount to slavery in another Nebraska backwater. Initially charming and supportive, Roy was soon revealed to be manipulative and capable of anything necessary to get what he wants, up to and including murder.

Ash is an engaging character, reluctant to break rules except where absolutely necessary, with capabilities that are impressive without stretching credulity. His delight in the action, even as his life is under threat, adds another dimension. Roy is a testing opponent, well prepared for confrontation and with plenty of resources, calling for the best of Ash.

Helene, however, is the one who emerges as the most gripping character. As she realises the full extent of Roy’s evil nature and how careful he is to block her escape, it would be easy to succumb to despair but somehow she finds the strength to wait for any opening and eventually shows Roy a side of herself that appeals to his warped nature. Her only fear is that she is becoming like him and that the metamorphosis may be irreversible.

As Roy starts to lose all bounds of restraint, it becomes clear that an early showdown is inevitable. When the dust settles, there is another twist that raises some interesting speculations. This is a thrilling ride with plenty of action from start to finish.