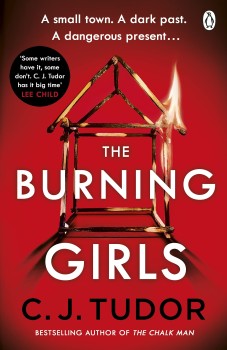 For Rev Jack Brooks the sleepy village of Chapel Croft is a new start. But its murky past already has new stems coiling above the ground.

Rev Jack Brooks knows God’s hand is not guiding his move to the East Sussex village of Chapel Croft. It’s that slimy, fake-smile Bishop Durkin covering his backside after the horrendous death of a little girl in Jack’s city parish. It’s not a suggestion – it’s an order. Relocate or drop the dog collar.

Jack’s daughter, Flo - 15, sassy, and a city girl - is furious. She doesn’t want to leave her friends. She certainly doesn’t want to fade into being an extra in Chapel Croft’s mind-numbingly dull life that could be a 3D remake of The Archers.

It doesn’t help that from day one, antagonism and history are vying to make their already difficult move even bleaker. Between the sinister messages, the twig dolls, the story of the missing girls, and Flo’s visions of burning girls, Jack and Flo feel short-changed on the welcome to Chapel Croft.

Flo is even less convinced when a couple of local teenage bullies target her. Perhaps more disconcerting is the reason the position became available for Jack – the mysterious circumstances behind the death of the previous vicar. And the past puts Jack and Flo’s lives at risk.

CJ Tudor has done it again. Perhaps the adjectives fun, bright, and refreshing seem inappropriate to a dark and sinister murder mystery, but they fit. She has wrapped up a delightful parcel of twists, turns, intrigue, and spook, and offered it with an accessible writing style and believable, 3D characters.

Jack is a rounded, full-on person. The flawed reverend whose past is hardly dove-white. The secret smoker, the slightly obsessive parent, the vicar who is not averse to blaspheming. Someone who most people will relate to and invest in.

Flo is, as most teenagers are, mercurial, moody, secretive, not opposed to lying or swearing, unsure of her priorities. But she is a good kid trying to do the right thing. Her first teenage crush is fresh and authentic. I struggled with identifying some of the lesser characters, particularly the couples, which pulled me slightly out of the story. But Wrigley, Flo’s soon-to-be boyfriend, is well developed.

I love the conscious or otherwise nod to Midsomer Murders, with the vivid description of the milieu and the residents’ dirty undercurrent muddying the quaint village life. The hierarchy, the history, the unexplained disappearances of two teenage girls all those years ago and the obligatory religious-based deaths from the 1500s. It’s all in there, but the entwined sub-plots don’t crowd or diminish the main thread.

This is not a book to talk about, it is a fast, satisfying one to devour, if the reader can balance the bullying, the dark moments, and the deliberate loose ends with a sharp story and leap-off-the-page main characters.