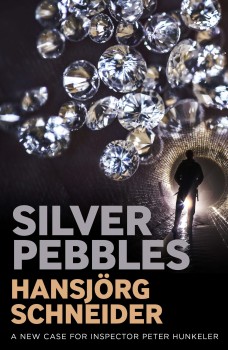 When a package of diamonds is lost in a sewer, Inspector Peter Hunkeler fears for the man he suspects found them and sets out to find the originally intended recipient.

This is the second Peter Hunkeler novel to appear in an English translation; the first, The Basel Killings, is set in 2004 with Hunkeler nearing retirement. This book is set in 1993, but Hunkeler is the same irascible detective, profoundly dissatisfied with the prejudices and smug complacency of the Swiss middle class, including his colleagues.

In The Basel Killings it was the easy blame assigned to travellers and immigrants that attracted his ire; here he fulminates against the way the police have become an instrument of the powerful to suppress minorities under the pretext of authority. His criticism extends to his own failings, which show him to be all too human, although his understanding of weakness gives him insight into the crimes he is sent to tackle.

The Basel police are given a tip that a courier on behalf of a drug gang is arriving at the train station with a package of diamonds. The interception is bungled and the courier manages to flush his package down the toilet. The diamonds are found by a sewer worker, Erdogan, and it is not long before this becomes surmised both by the courier, who is pressed to recover the stones, and by Hunkeler.

So we have yet another version of the ‘found treasure’ story, in which riches are promised but come at a price. Erdogan, a handsome Turk, is living with Erika, a rather plump 52-year-old checkout woman. Erdogan is out of his depth, and his stubborn refusal to give up the diamonds is clearly going to put both himself and Erika at risk. Erika is smarter than most people would credit, and thinks hard about how to hold on to the precarious but precious life she enjoys so much.

We hear from three sides of a triangle: the courier and his principal, a man known to Hunkeler and a pillar of local respectability; from Hunkeler who has perforce to wait for developments, and from Erika as she tries to manoeuvre Erdogan and others who threaten her peace and security. Erika and Erdogan are brilliantly depicted, their foibles described with such affection that you genuinely worry about the outcome.

Why this series has taken so long to appear in English is unclear, when there is so much about it to like. Hunkeler is a great character, and his rants about society and the biases of the police certainly will find echoes elsewhere. The setting, the misty valleys below the alps, is conveyed convincingly, and Hunkeler’s love for the remaining bits of rural life comes across too.

The book was first published in German in 1993 and remains entirely relevant in its political observations, although no doubt some of the social aspects of life have changed, not necessarily for the better. As a crime story it stands up as well as it did on the day it was written, and that is very well.