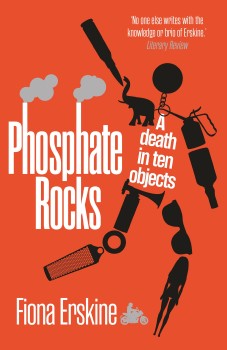 A body is found in a chemical factory on Leith Docks, together with ten objects that might provide vital clues to the death.

A body is found in a disused basement, sitting at a desk, mummified inside a carapace of powdered rock. On the desk are ten objects, each providing a clue for DI Rose Irvine, interpreted through the recollections of John, a foreman at the works. Each object triggers a memory of a specific event, viewed within the context of a different industrial process.

The chemicals manipulated in the plant are used for a wide range of industrial purposes but somewhat ironically, given the dangerous character of most of them, the primary purpose was the creation of fertiliser. The extraction of much of the raw material is both difficult and hazardous, and its carriage and processing is equally, if not more, problematic. Some of the events narrated are quite hair-raising, and there are several horrendous incidents involving highly toxic chemicals, hopefully before Health and Safety procedures became quite so ubiquitous.

This most unusual book melds the police investigation into a death with a series of incidents in a chemical factory. Fiona Erskine acknowledges that Phosphate Rocks is a fictionalised account of her workplace adventures at the Leith Fertiliser Works during the 1980s. The fiction necessarily incorporates depiction of the operations at the plant, and to assist the chemically ignorant, sections at the end explain the chemistry in detail, and give brief biographies of the people who first developed the theories and methods employed there.

Readers may find the struggle to render raw products into a suitable form for use rather more engrossing than the crime story, which in truth mainly takes the form of DI Irvine encouraging retired foreman John to dredge from his memory incidents long consigned to history. The relationship is a courteous one, and with John’s encouragement, Irvine is persuaded to sample the delights of an Italian cafe in Leith in exchange for her usual healthy lunch of a bag of crisps, a Twix and a bottle of Irn-Bru.

As with most books set in Scotland, the speech is rendered in English rather than the Scots vernacular, although one or two dialect words creep in to give a reminder that the real conversations would have been of a rather different flavour.

The book is particularly likely to interest those who dropped chemistry at an early stage of their education and would like to know more, delivered in a manner that entertains without being too didactic. One digression I enjoyed discusses organic impurities in phosphate such as mercaptans, otherwise known as thiols. Humans detect skunk mercaptans at concentrations of ten parts per million, but dogs can’t smell them at all, apparently, which explains quite a lot about the dogs I know.