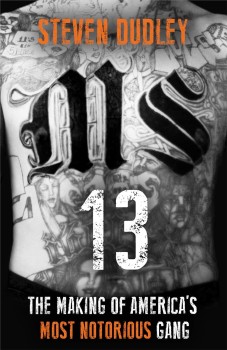 The evolution of MS-13, one of the most infamous street gangs on earth is documented through the experiences of former gang members.

MS-13 is one of the largest street gangs in the world, with tens of thousands of members throughout Central America and urban centres in the US. It is linked to thousands of grisly murders annually. Steven Dudley traces its emergence in El Salvador and explains the factors that fuelled its growth, illustrating the impact on young men by reference to a few selected individuals.

The Mara Salvatrucha, known as MS 13, had its foundations in El Salvador in the late 1970s. Central America has long been destabilised by US imperialism – Dudley refers to the plundering by soldier of fortune William Walker before 1860 after which ‘the US routinely allied with wealthy landowners to keep labor in check’. By the 1980s, fears about the spread of communism led to substantial US funding of right-wing groups.

With civil war, massacres and a complete breakdown of order, Salvadorians began to flee, with the US as the preferred haven. Refugees arrived in Los Angeles in large numbers and by 1983 a group calling themselves MS appeared in the city. Competition and stricter gang laws encouraged development of a more formal structure and more violence, both inside and outside of gaol.

The stories of gang members interviewed by Dudley show that many MS members were moving back and forth between El Salvador and the US. Endemic corruption, grinding poverty and rampant violence encouraged many to flee to the US, but immigrants found it hard to shrug off gang connections and were prone to being repatriated under anti-gang laws, only to face the same conditions that had impelled them to leave in the first place. Whether at liberty or in prison in either jurisdiction, gang membership was the only protection, but any attempt to leave could bring violent retribution.

Authorities in US tackle MS-13 using the same statutes designed to tackle organised crime such as the Mafia, although it seems that the hierarchy of MS-13 is less formal than traditional organised crime groups. Alarmed by the violence in various cities across US, action has been sustained throughout the Obama and Trump administrations, but after nearly 40 years, MS-13 is more widespread than ever.

This is a very readable account, blending a historical perspective with the personal accounts of some gang members. Dudley explains the dilemmas they face sympathetically but highlights when he finds their testimony wanting or self-serving. The book comes with a glossary, extensive notes and a bibliography for those who wish to pursue further reading, and is a serious piece of work.

The organisation of the material reflects the intention to retain reader interest, and with that aim, the narrative moves back and forward in time as well as to and fro across international borders, sometimes to an extent that calls for concentration. Dudley sheds a welcome light on the matter, especially as attempts to tackle the phenomenon have so signally failed to gain traction.