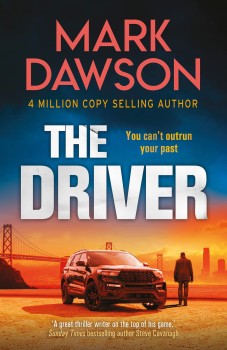 John Milton is doing his best to atone for the high body count he left behind in his work for the British government. So when a woman he drives to a party disappears, Milton can’t just forget her, even if getting involved risks bringing him to the notice of the people he’s running from.

John Milton is trying to leave his past very firmly behind. He used to do some wholly deniable work for the shadier side of the British security services, work that mainly involved killing people and not asking too many – if any – questions. Eventually, Milton walked away from that life and from the high body count he’d racked up, but his former job isn’t the sort that comes with a peaceful retirement plan, so he’s now on the run, rarely staying in any place for long, always keeping below the radar.

For now, he’s working as a taxi driver in San Francisco and trying to keep his other problem – alcohol – under control by regular attendance at meetings where he makes the tea and coffee and simply listens to other people’s stories whilst remaining tight-lipped about his own past.

His attempts to remain wholly under the radar takes a short walk off a high cliff the night a girl he drives to a party at swanky clifftop house goes missing. Milton initially hadn’t been happy to discover he had an escort in his car, and that he was expected to drive her to a job, but after talking to her, he was equally unhappy about leaving her on her own, either so decides to hang around and drive her home. Then he hears screams and sees her, clearly drugged and terrified, claiming someone is trying to kill her. She runs off, and he loses track of her. Then when her distraught boyfriend contacts him to say she’s gone missing, Milton puts her safety before his own, and goes with Tripp (who reminded me of a well-intentioned but somewhat dim young Labrador) to the police in an attempt to get them to investigate. At first it’s an uphill struggle to interest them in a missing escort, then the body of a young woman is found near the cliffs and the tension ramps up even further.

This is the third book in the John Milton series, but my first outing in his company. The alcoholic main character is a well-worn trope in the world of crime and thrillers and one that often feels rather threadbare, but to my surprise, I found myself quickly liking Milton as unlike the latest crop of action heroes he never lets his problems overwhelm his innate professionalism. He’s the sort of man who finds it hard to turn a blind eye when his help is needed, and when someone in his alcohol dependency group gets on the wrong side of a loan shark, Milton has no qualms about getting involved. When the occasion demands, he doesn’t hold back and his methods aren’t for the fainthearted, but they’re certainly effective.

The other trope that Dawson employs to good effect is that of the drifter who rights wrongs, much like iconic Jack Reacher, but here the fight scenes are over too quickly to get bogged down in detail that takes longer to read than the action they describe. By contrast, Mark Dawson’s writing gets straight to the point. Milton is tough, clever and has lost none of his former skills. He plays an inventive get-out-of-jail trick with a microwave that I particularly liked. Dawson avoids info dumps, and the story moves along at a respectable clip.

The identity of the bad guy isn’t hard to guess, but that didn’t detract from my enjoyment of a good story, well told. I’m sure that wherever Milton ends up next, he won’t stay out of trouble for long. Despite his high body count, he’s a decent bloke at heart. I just wouldn’t want to get on his bad side.