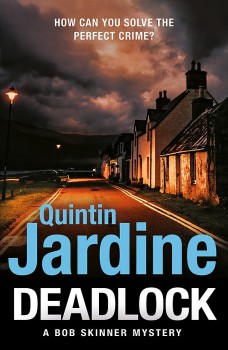 A spate of deaths amongst the elderly and vulnerable in Bob Skinner’s home village of Gullane are at first written off as accidental and unconnected, but a young police officer isn’t so sure. On top of this, new Chief Constable Neil McIlhenny has a very delicate murder investigation on his hands, one that threatens to ruffle quite a few feathers.

Against the backdrop of COVID-19, former Chief Constable Bob Skinner is grappling with his sudden rise to the top of the Intermedia news empire after his friend Xavier Aislado steps back from the board following the death of his wife Sheila to enable him to come to terms with his loss. On top of this, never one to let the grass grow under his feet, Skinner’s just emerged from 10 days isolation along with his wife Sarah and has now volunteered to help a local group brought together by a writer friend to help elderly and vulnerable people in his home village of Gullane.

There’s change on another front, too. Skinner’s long-time friend Maggie Rose Steele, Chief Constable of Police Scotland, has retired and the job has gone to Neil McIlhenney, one half of the infamous pairing formerly known as the Glimmer Twins, with the other half, Mario McGuire remaining in post as Deputy Chief Constable. McIlhenney is determined not to be seen as being in the shadow of his former friend and mentor and so not very subtly tells Skinner that the senior police team won’t be coming to him for advice and support the way they used to do, nor will he be required to continue mentoring younger officers.

Everything seems set for a clean(ish) break between Sir Robert Skinner and his former profession, with him concentrating on his more recent job as a media executive. However, to quote an even more famous Scotsman: “The best laid schemes o' mice an' men gang aft a-gley.” Although I very much doubt Robbie Burns had anything quite so dramatic as a headless corpse in mind when he wrote those words.

McIlhenney’s capable subordinate Detective Chief Inspector Lottie Mann quickly finds the investigation is at times well above her pay grade when the flat where the corpse was discovered turns out to have links to the British Secret Service. And matters become even more complicated when Sir Andrew Martin, former Chief Constable of Police Scotland and now aspiring member of the Scottish Parliament, is believed to have links to the dead man.

A little below the rarefied air at senior command level, DS Noele McClair has to contend with the irate daughter of an elderly man who died at home, possibly of an accidental overdose of one of his medications. Then when other elderly people are found dead, a young PC thinks she’s found a connection between them, despite the medical examiner believing them all to be accidental, and the hunt for a mysterious boy on a bike begins.

On one level, Deadlock is another instalment of the lengthy soap opera surrounding the career and private life of Bob Skinner and on another, it’s a clever police thriller with two separate storylines that finally converge in a wholly unexpected way. With a relatively limited character set (yes, I am aware of the irony of that statement in a Skinner novel!), it wasn’t hard to make an educated guess at who was behind the deaths of the elderly folks of Gullane, if anyone was, but it was harder to connect these to the murder and decapitation of the man in the security services flat, tentatively identified as Clyde Houseman, former soldier turned spook.

I turned the pages of Deadlock avidly, enjoying the return to form of an old favourite that skilfully builds on the foundations laid in the previous book, The Roots of Evil and rounds off some stories, while bringing others into contention for the future. Based on this book and its predecessor, there’s plenty of life left in this particular old dog, and I’m looking forward to the continuing adventures of copper-turned-journalist Bob Skinner. I was also pleased to see a tentative rapprochement with his former best friend and colleague Andy Martin. With Skinner heading a media empire, Martin in politics and the Glimmer Twins back in action together, there’s plenty of scope left in this ever-entertaining sandpit.

My only gripe is with the abrupt ending that left me turning non-existent pages in frustration, looking for an epilogue that didn’t come! I would have liked something more to help make sense of the intriguing and interconnected events that had kept me thoroughly engrossed while I galloped through the book with positively indecent haste.