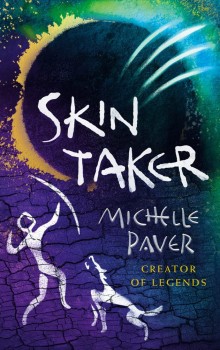 When a meteorite strike wipes out a huge area of forest, the clans must come together to survive, but unless a way can be found to bring the First Tree back to life, they are all doomed.

Coming late to a series is always tricky and in the case of Michelle Paver’s Wolf Brother children’s series, I’ve arrived very late indeed with the eighth and penultimate book. To my surprise, that wasn’t in any way a problem.

This delightfully immersive story starts with bang, the extremely loud bang of a meteorite coming to earth somewhere in a dark winter forest in northern Europe approximately six thousand years ago. The devastation is immense and terrifying, killing humans and animals alike as a huge swathe of forest is turned into blackened matchwood, darkening the sky and altering the landscape. The survivors say the disaster has been caused by the Thunderstar.

The ragged survivors of various clans come together, desperately trying to stay alive, but unless a way can be found to bring back the First Tree, they know their chances of survival are low. This seemingly impossible task falls to Torak, Renn and their furry companion, Wolf, guided by clan leader Finn-Kedinn and helped by Dark, who will craft the arrow points needed for Renn to complete the ritual in the depths of the remaining forest.

To complete their task, the three must stand against a cruel and relentless enemy they’d thought was dead as well as battling hostile clans and surviving the biting cold of winter in a dead and dying forest.

I’ve been hooked on books set in the depth of prehistory since first reading Jean M Auel’s classic Clan of the Cave Bear back in the mid-1970s, but whereas Auel’s series featuring the redoubtable Ayla quickly started to strain any suspension of disbelief, Paver’s has stayed true to its period, plunging me quickly into a world of resourceful and resilient hunter-gatherers in a time before the people of northern Scandinavia turned to the more settled – but not necessary easier – life of farming.

Torak’s bond with Wolf clearly transcends the differences of their species and when writing from Wolf’s point if view, it’s possible to see and experience the world through his eyes. Paver breathes life into the period through meticulous and endlessly fascinating detail to paint a vivid and convincing picture of a world in which very little had changed for 40,000 years. The hunters honour the animals they kill and waste nothing, relying on them for food, clothing and so much more. Plants, trees and even the earth itself have medicinal uses and the connection to nature is an important theme throughout the book. Magic rituals form part of everyday life and it is to magic that the clans turn after the destruction of their forest home.

Paver’s tale is sometimes brutal and frightening, but it is also uplifting and instructive. In a time before formal religion as we now know it, there is a spiritual bond between the clans and the animals they rely on for their survival. All living creatures are believed to have souls and to kill without good reason threatens to disrupt the balance between human and animal. There are lessons for today’s world, but Paver never preaches, and this is at its heart a romping good tale for younger readers and adults like me whose reading habits haven’t changed much down the years.

Wolf Brother works perfectly well as a standalone, but I strongly suspect that if, like me, you come late to the party, you’ll want to gallop to the end and then loop around to start again at the beginning. I would certainly like to know more about the world of Torak, Renn and Wolf.