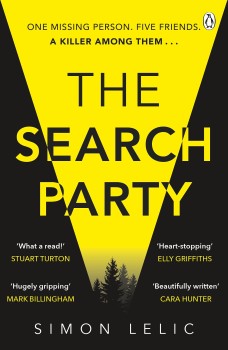 When 16-year-old Sadie Saunders still hasn’t been found, her five friends decide to take matters into their own hands and carry out a search of a local woodland. But not all of them will leave the woods alive.

Sixteen-year-old Sadie Saunders has been missing for a week and hopes of finding her alive are starting to fade. The police search has drawn a resounding blank, so Sadie’s five closest friends take matters into their own hands and set off together into the local woods, woefully under-equipped, but determined to find their friend. But not all of them will leave the woods alive.

The five teenagers, Abi, Fash, Luke, Cora and Mason, tell their stories in alternating perspectives, as does DI Robin Fleet, the police officer responsible for coordinating the search. Pulling off that many distinctive points of view is challenging; most authors struggle even with two or three, so five is ambitious, to say the least. To start with, I felt Simon Lelic had bitten off more than he could chew. Except for the passages from DI Fleet’s point of view, written in a straightforward third person style, I struggled to distinguish the characters from each other, despite the names at the top of the chapters as the various narrators communicate mainly in a stream of consciousness, often vivid, almost always disjointed.

The style brings a sharp sense of immediacy to the story as Fleet struggles to make sense of what’s happened. From the start, it’s clear there’s been a death. It’s equally clear it’s not the discovery of Sadie’s body that made such a startling impression on the police officer tasked with finding the missing teenager, but the identity of the body is held back. Telling reliable apart from the inevitable unreliable ones is impossible, at least for most of the book, and even in the closing stages, it was hard to make a judgment call on that score. There’s a very strong Blair Witch Project vibe about the whole thing, with a shaky, emotional narrative taking the place of grainy, wobbly camera footage.

Abi, the first of the teenagers to talk, promptly sets the scene by stating that all of the others are lying. Frankly, I doubted that any of them would know the truth if it sidled up and bit them on the bum! And I think the long-suffering Fleet felt the same way. Cora, the next to talk, equally promptly says that even Abi is nowhere near as innocent as she seems. Yep, you’ve guessed it. No one can be trusted.

The narratives are knee deep in misdirection. and trying to pick out the occasional nuggets of truth became a entertaining game. I had my suspicions and managed to avoid some carefully set pitfalls whilst tumbling headfirst into others. My stumbling progress through the investigation was much like the way the teenagers seemed to blunder around the woods.

One problem I had with the story was the lack of a sense of place. The woods were large enough for a bunch of teenagers to get thoroughly lost in overnight, despite a large police presence in the area, and they felt more like a narrative metaphor for being in the dark rather than a geographical reality. That feeling was only intensified when the group came on what felt like an even more unlikely feature, a cave with a chamber big enough for the group to sleep in overnight. There was a very distinct Enid Blyton feel to that geological convenience. OK, call me Ms Fussypants; I accept that as a caver I tend to cast a very beady eye over any fictional caves, but I think it’s not unreasonable to expect fictional underground places to at least be vaguely geologically plausible and I didn’t get any sense of reality here.

That aside, as I became drawn further into the story and started to get a stronger sense of the different personalities and their often-strained relationships, my reading pace started to pick up speed as the group hurtled towards the inevitable shitshow, as DS Nicky Collins graphically described it to her boss.

I liked both Fleet and Collins. Naturally, Fleet has an off-stage backstory that comes out in dribs and drabs, and equally naturally in the eyes of his boss and others that casts a cloud over his handling of both the search and the subsequent investigation, but most of the time he’s just a perfectly ordinary, tired copper, frustrated by a bunch of teens lying through their teeth to him. He’s going to make another appearance, which was welcome news.