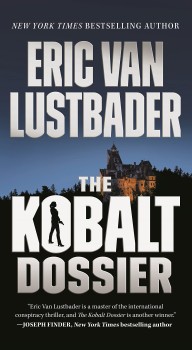 Evan Ryder returns to Washington to find her twin sister’s two children are missing. Her secret intelligence unit has been axed, but the Nemesis organisation still wants her dead.

Eric van Lustbader operates to a strict formula. His books are sophisticatedly dark, expertly plotted, at times almost hypnotically suspenseful tales of international or domestic political ambition, betrayal and cutting-edge technology, which plays to almost every current conspiracy theory, set in as many exotic locations as he can get into the story with any credibility.

It’s all so slickly Hollywood, so typically American it’s not true. Somewhere there’s always a new super-secret department of Russian intelligence hatching some dreadful plot only to be foiled by a clean-cut, outstandingly brilliant and totally lethal American super-hero – it’s only a surprise that the talentless Tom Cruise has not signed up the film rights for every book to make the sort of movie he does best for an audience with a minimal attention span and a love of comic book violence.

The Nemesis Manifesto offered an overdue and welcome break. Its main protagonist Evan Ryder broke the mould, conclusively proving that women in intelligence need never again be regarded as damsels in distress and are more than capable of taking on the dragons and slaying them in at least as an efficient and bloodthirsty manner as their male counterparts.

What promised to be an exciting female-driven series has fallen at the second hurdle. Evan is still there, still as driven, still as deadly. But having seen off Nemesis, an international, fascist syndicate supported by the Russian SVR, she now finds herself the target of a cabal of religiously fundamentalist American billionaires who were among its supporters.

Not only that, she has lost her job with a super-secret division of the Department of Defense, and the two children of her apparently dead sister are missing, believed kidnapped.

Confused? You will be as Evan and her former boss, Ben Butler, must learn to work together as partners – despite a romantically tangled past –.and face down both the fundamentalists and the former jailbird killers fronting yet another dastardly Russian plot!

Their improbable journey takes them from the American Midwest, via Washington to the Ukraine, Istanbul and an ancient church deep in the Carpathian Mountains, the legendary home of the vampire Count Dracula.

While the inevitable vicious power struggle among the ranks of the Russian intelligence and political hierarchy plays out in Moscow, Evan learns something of her past – and something of her new enemies, a psychotic ultra-white supremacist religious group called Omega, whose demented leader Ana compares herself and her followers to Noah in the Biblical flood and advocates a ‘global purge’ of impure mankind before true believers can be ‘saved’.

Along with saving her missing niece and nephew, she must also deal with the threat of a new and extraordinarily ruthless and merciless cold-blooded killer codenamed Kobalt – almost Evan’s mirror image – and an employee of a shadowy Russian intelligence operation known only as Zaslon a unit so secret that even the rest of the SVR knows little or nothing about it!

That’s a relatively easy way to describe a complicated plot which also includes a lengthy psychological explanation on the nature and relationship of twins, a minimal involvement from the BND (the German intelligence service), hunting a legendary Arab terrorist, and an explanation of some the extraordinary measures taken to protect possible invasion routes into Western Germany when the Cold War threat was at its height.

Evan’s inevitable confrontation with the equally deadly Kobalt is postponed to what will be the third story of the series – its plot already so obviously predictable from this farrago of nonsense – as van Lustbader weaves his usual hugely over the top web of characters, cutting-edge technology, powerful political ambitions and sheer bloody brutality.

He writes so well and clearly, almost lyrically at times, that it seems a shame the book entirely lacks a reasonable working relationship with fact rather than sheer sensationalism.