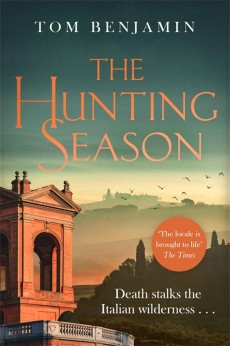 A Korean/American couple ask English detective Daniel Leicester, who lives in Bologna, to find their son Ryan.  Ryan has gone missing in the city while visiting for work.

Daniel Leicester is a private investigator, working for his father-in-law, The Comandante, in Bologna. Following the death of his wife many years ago, Daniel is bringing up his teenage daughter and both are living with the father-in-law, and his son and daughter. All work in the business, together with new recruit Dolores.

A Korean/American couple come to ask Daniel to find their son who has gone missing during a working trip to Bologna. The missing son is a supertaster and coincidently this is the peak time for the local truffle industry. The team begin by visiting a number of local restaurants. In some they find a small but beautifully made paper model. In due course a body is found in central Bologna, along with a dead truffle-hunting dog. The investigation is constantly followed by a journalist, Oriana de Principe, who seems intent on causing Daniel all sorts of trouble.

This is the second book in a series about Daniel Leicester. Daniel and his family are being further developed in this story, and so are beginning to feel familiar. Another link to the past is Dolores. She was one of the main characters in the previous story and provides an excellent contrast to Daniel’s very traditional family. These characters now provide an superb vehicle for an in-depth understanding of what it must feel like living and working in central Bologna. The other characters in the story come and go and it is more difficult to remember much about them as they appear. Some back-tracking was occasionally necessary and although a bit frustrating, was worth it in the long run.

The story starts slowly, giving plenty of time to absorb the atmosphere of Italian life, with wonderful descriptions of parts of the medieval centre of Bologna: the porticos through which the pavements pass; the houses, some with their own towers, built by the wealthy and powerful citizens of the past to demonstrate their importance; the typical restaurants, busy at lunchtimes, with the genuine local ones often quite unprepossessing, interspersed amongst those aimed at the tourists. The description of the delicately folded paper models, found in some of the restaurants, was equally evocative, but of a different culture.

As Daniel continues his investigations he goes to a range of typical places outside, but in the vicinity of Bologna, and gets deeply involved in the workings of the artisanal food business, in particular that of the truffle trade.  His search in the forest, amongst the scattered old farms and impressive manor houses, leads him into all sorts of trouble, in which his too trusting character leads to plenty of embarrassment – not the way for him to best impress his daughter. However, Daniel is both diligent and determined and a character that can be related to.

A number of issues are addressed such as modern slavery and the irresponsibility of some media outfits and the book throughout is up to date with its references to modern technology. The pace of the last half of the story increases without losing the Italian feel, and without losing hope of finding the missing person. This is certainly a book to be savoured if travel to Italy is being missed during these difficult times.