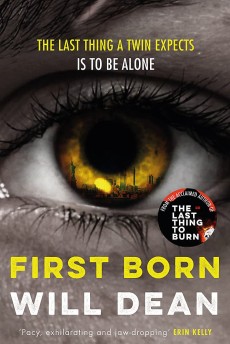 Twins Molly and Katie had never been apart until Katie moved to study in New York a year ago. Now she is dead, and Molly travels across the ocean to be with her parents and to search for the truth about her death as she is the only person who knows everything about her twin.

Anyone who has read Will Dean’s four Tuva Moodyson’s mysteries will know that deep Swedish forests and small remote communities can be very dangerous places to be. However, enter New York and danger appears in many forms, tensions rise to unpredictable levels and every step in that buzzing metropolis needs to be carefully calculated, properly risk-assessed and considered.

That’s exactly what 22-year-old Molly Raven is doing. She has lived an extremely cautious existence in London. As a naturally anxious person, she has mastered the art of preparation and is fully conscious of all possible threats, both imagined and real. She has always had the support of her caring loving parents, Paul and Elizabeth, and a constant, ever-open line of communication to her sister Katie, which has usually helped.
This time, however, not only the sheer nature of New York and the mass of people make her terrified but also the circumstances she finds herself in. Her identical twin sister Katie, the exuberant and extrovert woman and complete opposite to Molly, who loves the new, wild experiences of just living, has been found murdered in her little apartment.

A year earlier Katie moved across the globe to study, thanks to an unusual but very generous sponsorship. Molly’s apparently safe and contained world collapsed with that move, so now while she’s trying to comfort her devastated parents, she also needs to find out exactly what has happened, and who’s responsible for killing a part of her.

The police are working on the case, following the leads, as are some private detectives. Molly’s awareness of risks pushes her to use strange logic to find answers, and she puts together a small arsenal of items for self-defence, legally approved in New York and begins to piece together a picture of her twin’s last movements.

She finds more about a handsome boyfriend from Columbia University, a close American female friend turning needy, and a creepy misogynist man, aka alpha influencer, in the same apartment building. Molly is skilled in the art of online deceit, and follows a trail of emails that present a different Katie – one that was involved in some complicated relationships, including with her tutor.

The murderer is on the loose and Molly will do absolutely everything to right the wrongs, to avenge her sister, to seek revenge on those who destroyed her life in the process of killing Katie. Homicidal asphyxiation isn’t something to be ignored and forgiven.

First Born brings together all the qualities of Dean’s writing: great pace, flowing narration, emotional intensity, and masses of variations that throw the reader off scent. This psychological thriller is a masterpiece of intricately planned confusion, a how-to-guide of deception, and a study of deep bond between two young women, emotionally close yet starting to move in different directions. Dean analyses loneliness and the issue of identity, all wrapped in the classic elements of a murder mystery. And whatever way you look at it, this is a unique love letter to the city that never sleeps.