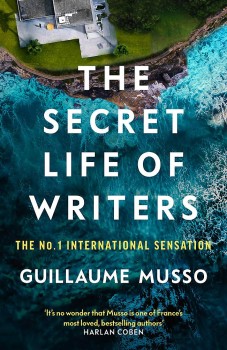 The Secret Life of Writers

In 1999 the celebrated author Nathan Fawles withdrew to Beaumont, a stunning wild island in Mediterranean. After publishing three successful novels he stopped both writing and contact with the outside world. Nearly 20 years later a young Swiss journalist tries to unlock his secrets when a grim crime takes place on the island.

The Secret Life of Writers, or a book within a book, is indeed full of enigmas and as the novel progresses, we discover that some of them have been buried deep enough to shatter lives and perceptions. It all starts with the obsessive interest in the celebrated author Nathan Fawles, famous for his three cult books.

In 1999 after his stratospheric rise in the publishing world, he announced the end of his writing career and withdrew to Beaumont, a wild beautiful island off the Mediterranean coast. The island’s private ownership, wonderful scenery, close location to the mainland but no provisions for tourists, friendly locals and comfortable life are all bliss. Now Nathan belongs here but keeps himself private, has no mobile and no internet, and doesn’t hesitate to use a gun to protect his property. His novels continue to captivate readers, yet he refused to write another. In autumn 2018 the situation seems to change.

First, Raphael, a young and keen unpublished writer, gets a temporary job at the only bookshop there and tries to reach and ask the reclusive Nathan read his manuscript, almost getting shot in the process. Scared but unwavering, Raphael leaves his manuscript outside the house.
Then Mathilde Monney, a young Swiss journalist, arrives on the island, determined to secure the first interview with Nathan in nearly 20 years. She initially appears when returning Nathan’s lost dog, followed by clever conversation that makes the author both intrigued and angry.

Mathilde has met him before and wants to give him a gift of a story about a French couple Apolline and Karim, a missing camera and forgotten family celebrations. All this doesn’t seem to make much sense, but the seeds of mystery are sewn and the past starts to unfold.

As Raphael and Mathilde separately plan their encounters with Nathan, a woman's tortured body is discovered on the beach. The island is cordoned off by the authorities, a terrible blow for its shocked inhabitants. But that horrendous crime has roots in the events that had happened long ago and as Mathilde wriggles into Nathan’s quiet existence, he in turn asks Raphael to spy on her.

Guillaume Musso builds suspense slowly and elegantly, using different points of view, and making sure that we are not convinced who is right or wrong. He keeps adding elements from various stories while creating a very believable narration spanning locations in France and abroad and fixing them in recent European history.

The line between truth and fiction becomes increasingly blurred as his characters try to uncover any possible links between what they actually know and what they might have deduced from some old photographs, a pile of hidden love letters that come to light, a change of name, and more amateur detective work.

What eventually appears will take the reader by surprise when it becomes clear that old emotions and injustices must be avenged. Nothing is forgotten under the changeable Mediterranean sky. But even if crimes are horrendous, wry humour can still be found in retelling them.

This is a stylish, tense and ultimately thrilling tale of the power of words to create new realities, An excellent translation by Vineet Lal brings The Secret Life of Writers to the fore of French suspense writing.