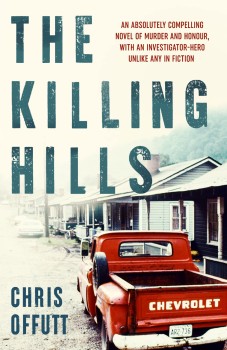 Army CID agent Mick Hardin has come back to Kentucky on leave and agrees to help the local sheriff, his sister, with her first murder case.

Mick Hardin is a veteran of US wars in the Middle East, and lately a CID officer, who seeks leave when his sister informs him of his wife’s pregnancy. On arrival his wife tells him that she is unsure who is the father of her unborn child, and Hardin goes on a nine-day drunken binge in his grandfather’s old cabin in the hills.

He throws off his disorientation, however, when the body of a young woman is found in the woods. His sister, the sheriff, could use his help, especially when a local politician foists an FBI agent on her, probably reporting back any unwelcome direction of the investigation.

Hardin starts asking around, something which calls for more than usual reserves of tact. The Kentucky backwoods are not a place where folks welcome questions, and strangers tend to get greeted with a shotgun. Even Hardin’s name and known family history get him only so far as the dead girl’s family intend to take their revenge in the traditional local manner without bothering law enforcement agents.

As if the situation were not difficult enough, there is an added complication arising from the involvement of the perpetrator in the distribution of methamphetamine. The Chicago supplier sends a couple of enforcers to protect their distributor, and they naturally target the man who appears to be most likely to find him.

The setting of this excellent tale, the Kentucky Appalachians, is depicted without sentimentality and leaves little doubt about the tough life of the residents and the consequential spirit of self-reliance. Generosity to neighbours is balanced with hatred for perceived enemies, with feuds that can last for generations, and hostility to outsiders (those whose families can’t be counted back several decades). Much of this is very funny, if occasionally alarming.

Hardin is a great investigator; in fact it is difficult to imagine anyone else who could negotiate the complexities of the locality. He proves to be very sensitive to nuances of speech and behaviour in those he questions, and is unfailingly respectful, which enables him to glean information that is denied to others. He also demonstrates an ability to handle himself when necessary, which underpins the confidence demonstrated in his general demeanour.

The story is conveyed in an economical style, with spare dialogue and a fast-moving narrative. The slow release of detail about Hardin’s background and his capabilities, as well as his feelings about the situation with his wife, brings the portrait of the man into tighter focus as the book progresses, and there’s a great sense of timing. This altogether excellent book whets the appetite for more Mick Hardin stories.