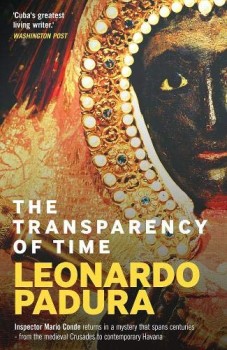 The Transparency of Time

Ex-inspector Mario Conde returns to help a friend recover a stolen black Madonna, a statue with a history dating back to the crusades.

Mario Conde left the Havana police force more than 20 years ago and now scrapes a living dealing in old books, but still retains the instincts which made him such a good cop. As his 60th birthday approaches, Conde is feeling discontented: he increasingly feels out of place in what Cuba is becoming, with a yawning gulf between rich and poor, and his contemporaries finding it difficult to survive with dignity.

His old skills still have value, however, and he is contacted by someone he knew from his schooldays, Bobby, now unexpectedly wealthy from semi-licit dealings in artworks. Bobby has had his house emptied by a gay lover while away for a few weeks and is particularly concerned to recover a black Madonna inherited from an uncle who brought the statue from Spain.

The story of Conde’s search is interrupted by interludes detailing the history of the Madonna from its origins in Africa, via the crusades to Europe, and then to Cuba during the Spanish Civil War. An oasis of calm has seemingly protected the statue through the centuries, although the men who carried it often fell victim to the greed and intolerance which the author suggests as the real reasons behind wars that were claimed to be about high-minded matters of principle.

Conde does the rounds of a new breed of businessman in Havana – those who exploit legal loopholes or bend the law to deal in artworks – and finds hitherto unknown enclaves of wealth and sophistication. His investigation also takes him to the poorest sections of the city, such as the area housing immigrants from the east of the country, where the poverty and squalor are terrible, worse by far even than the resource-starved fabric which the majority face every day.

The number of people aware of the value of the Madonna are few, and since all are lying to some degree about what they know it takes some time before Conde gets close to a solution. By that time, a couple of deaths mean the police are involved, although they too are looking to Conde for the answer. A few rum drinking sessions with Conde’s close friends Skinny Carlos and Rabbit are needed to refine his hunches and put him on the right track.

As in Conde’s previous outings, the action takes the reader into the very heart of Havana, through a hero who loves the city despite his frustrations with its many drawbacks. This latest outing suggests that things are changing, but not necessarily in a good way, and provides an insight into current political events. The range of Padura’s observations go beyond that, however, to aspects of the human condition generally.