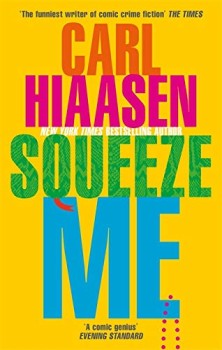 The disappearance of an elderly Palm Beach woman might have escaped notice were she not a rich high-profile supporter of the President, who knows exactly who to blame.

This latest book by Carl Hiaasen maintains the high standard of its predecessors, being devastatingly accurate in its social commentary. I defy any reader not to find it hilarious even as they wince at the terrible things people get up to, especially those well-off enough to be able to get away with it.

The book opens at a Palm Beach charity gala at the Lipid House Estate, a gathering which features among its attendees the POTUS pussies, aka Potussies, a group of elderly but wealthy women who are ardent fans of the President. One of their number, Kiki Pew Fitzsimmons, goes missing and when dragging the lake in the grounds produces no results, police are stumped.

As it happens, a young immigrant from Honduras, Diego Beltran, landed the same night. It is not long before he is apprehended by the police and when he is found to have in his possession a pearl identified to have been worn by Kiki Pew, some assumptions are made. The President is not slow to make use of the opportunity to generate support for his anti-immigration policies and the slogan ‘No more Diegos’ becomes heard widely amongst his more rabid fans.

One person has a better idea of what really happened to Kiki Pew, and that is Angie Armstrong, an animal wrangler used to dealing with both the wild creatures found in Florida, and the exotic pets imported by people with more enthusiasm than sense. Angie is brought in when the Lipid House manager discovers a gigantic Burmese python sleeping in a tree, digesting a large meal. The manager knows, however, that it would be very bad for his business if certain conclusions were drawn, and employs two dubious people to ensure the evidence disappears.

Angie has trouble distinguishing the activities of these agents from those of Pruitt, a man whose hand she fed to an alligator while working as a Florida wildlife officer. Although Angie served time for the offence, Pruitt still calls her every day threatening revenge in the most crude terms. These insults bother Angie less than her inability to make the police and FBI see that Beltran is entirely innocent of Kiki Pew’s demise.

The President (codenamed Mastodon) and the First Lady (Mockingbird) are brought into this because of their summer residence nearby, Kiki Pew’s support of the President, and the supposed threat to Mockingbird when her motorcade is momentarily delayed by the carcass of a python found on her route. We hear sufficient about the presidential household and the difficult lives of those assigned to protect them to confirm all our worst assumptions.

It is impossible to convey just how funny this book is, whilst at the same time making some very valid comments about human life in Florida, the US, indeed, pretty much everywhere. If you can’t do very much about it at least you can laugh about it.