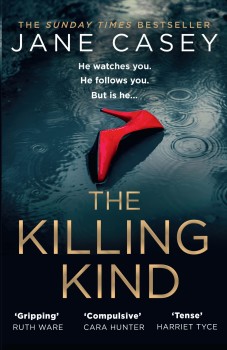 Barrister Ingrid Lewis is certain someone wants her dead. John Webster, given a two-year suspended sentence for stalking and harassing Ingrid, claims not to be involved and insists he’s the only person who can help her uncover the truth.

Ingrid Lewis is a barrister working in chambers in London. It’s her job to do the best for her clients, whether she believes them or not – providing, of course, that they don’t actually admit their guilt. And there’s no prospect of John Webster doing that. He’s charming and plausible, nothing like the controlling monstrosity Emma Seaton makes him out to be. Ingrid does her job well, and ensures Emma Seaton loses her case against her former boyfriend, who’s found not guilty of stalking and harassment.

Fast forward three years and a lot has happened to Ingrid, much of it bad, and a lot of it connected to her former client. Webster quickly turned his attention to Ingrid after the trial, harassing both her and her boyfriend, Mark, until the police finally got enough evidence to bring him to trial. Unfortunately for Ingrid, although Webster was convicted, all the judge imposed was a two-year suspended sentence and a restraining order.

When Belinda Grey QC is run over and killed by a lorry just after leaving court, carrying a distinctive umbrella that Ingrid had just lent her, it immediately raises the spectre in Ingrid’s mind that Webster is back, and that the stakes in his usual cat and mouse game have just been raised. After all, he did burn down her house …

Jane Casey weaves a chilling story of intimidation and mind-games where it’s almost impossible to distinguish truth from lies and no one is what they seem, except possibly the sociopathic Webster, who shows no remorse whatsoever for his past actions, whilst claiming to be the only person Ingrid can trust. Naturally, she’s not inclined to believe him, yet despite her better judgement, ends up drawn into his dangerous web again, and when the police conclude that Belinda Grey’s death was a tragic accident, Ingrid reluctantly turns to Webster.

Ingrid certainly makes some very dubious decisions, but Casey skilfully makes these look plausible, and equally skilfully sowed just enough doubt in my mind that I started to distrust the young barrister and her version of events, just as Webster – and his creator – intended. The ever-shifting narrative also demonstrates how easy it is to undermine a person’s version of events, and that’s exactly what barristers are paid to do. Her courtroom exchanges have real bite and confidence.

I didn’t find Ingrid the most sympathetic of characters and I suspect that was down to the feeling that she wasn’t playing fair in her first-person account. Important details were withheld and when they did appear, she always had a plausible reason for being so close-lipped, and then I started to tie myself in mental knots wondering whether I had fallen into the trap of blaming the victim. The mental knots started to take on Gordian proportions, but in the closing stages of The Killing Kind, I had developed some suspicions, based on gut instinct, and kept having to remind myself such instincts shouldn’t be ignored, even though there were times when Ingrid did exactly that!

Casey’s books are always sharply observant, excellently plotted and utterly convincing, and The Killing Kind is no exception.