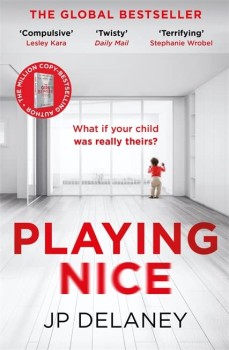 When a total stranger informs Pete Riley that the child he’s brought up as his own for the past two years isn’t his biological son, his world is in danger of falling apart. But Pete knows he and his wife can work this out with the other couple if only they all play nicely. Or at least he thinks they can …

When two strangers turn up unannounced on his doorstep, Pete Riley isn’t expecting to be told that the child he and his wife Maddie brought home from the hospital two years ago isn’t their biological child and that Theo is really the son of Miles and Lucy Lambert.

Despite the startling approach from Miles Lambert and a private investigator working for him, Pete and Maddie quickly resolve to keep matters civilised, even friendly, and after talking things through, they accept an invitation to the Lambert family’s house to meet their own biological child, David.

The gulf between the two couples is a wide one. Pete and Maddie live in an ordinary house and are struggling to make ends meet after Pete was made redundant from his job as a journalist. He’s now Theo’s full-time carer. Miles and Lucy live in a large, expensive house in a more exclusive area of London. He’s an investment banker, Lucy doesn’t need to work and they have a live-in nanny.

Sadly, there’s another difference between the two families: David suffered brain damage during his premature birth, whereas despite early concerns, Theo appears to have escaped unscathed from his, although he has been exhibiting some behavioural problems at nursery, becoming frustrated when asked to share toys, even resorting to biting and hitting other children.

When Theo’s troubled behaviour escalates, and he is excluded from nursery, Pete and Maddie are forced to examine how they feel about the child they have always thought of as their son and are faced with some difficult decisions when it becomes clear that it might well not be possible to keep matters between them and the Lamberts quite as friendly as they’d originally hoped.

On the face of it, Playing Nice is exactly the sort of book I run a mile from. Domestic noir, psychological thrillers, brand them how you like, they’re not normally my bag, with their staple fare of families with secrets, unreliable spouses, troubled children (often missing) … But JP Delaney’s clever, immersive tale got its hooks into me from the start and didn’t let go.

The story alternates between the points of view of Pete and Maddie and is sparing with the information it releases. There are no big info dumps, even when looking back at past events, but just the gradual reveal of telling snippets here and there that all contribute to a very cleverly constructed domestic thriller with a relentless build-up of almost unbearable tension as an ordinary couple find themselves fighting not for one but two children, seemingly outmanoeuvred and outgunned at every turn.

I stayed up late reading the book and then picked it up again immediately I woke up and as the slow but startling reveals kept coming, I genuinely couldn’t predict how things were going to end. Being hyper-critical, perhaps a couple of the ‘clues’ were a tad heavy-handed, but that’s a minor quibble set against the backdrop of a vastly entertaining narrative about two ordinary people facing a parent’s worst nightmare: the loss of the child they’ve loved and nurtured as their own. The book is also a salutary warning that not everyone is capable of playing nice, and that applies to both adults and children alike.