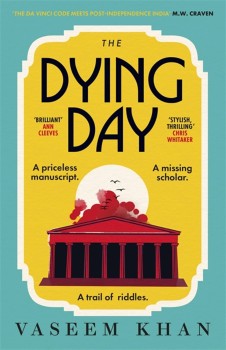 Persis Wadia, India’s first female detective, returns to investigate the disappearance of an academic and a valuable copy of Dante’s Divine Comedy.

This is the second in the series featuring Persis Wadia, who has battled opposition to become the first female detective in a newly-independent India. She continues to face prejudice and works out of Malabar House in Bombay, a small unit composed of officers who one way or another fail to enjoy favour with those at the top of the police hierarchy.

Malabar House is typically allocated cases with a high potential for embarrassment, such their latest assignment. John Healy, a visiting English scholar, has gone missing together with a rare copy of Dante’s Divine Comedy which he was studying. He has left a trail of clues for investigators to follow, with literary references and others involving some of the most outstanding buildings in Bombay.

Persis’ investigations enable author Vaseem Khan to take his readers to various structures of historical and architectural interest, most dating from the late 19th century. As usual, Khan displays his interest in various aspects of Bombay and provides copious details, and here it is the creations of the Raj that come to the fore.

The missing book turns out to be avidly sought by several foreign visitors, including an Italian who feels that the book should be returned to its place of creation. The missing academic had links to Italy, having been imprisoned there during the war, when he apparently suffered a trauma at the hands of the Nazis which is said to have changed his outlook on life. Again, Khan includes plenty of factual detail relevant to the time and place.

The trail of clues is a device reminiscent of some of the classics of crime fiction and can be fun especially when the reader spots the solution ahead of time. Healy’s motives are difficult to fathom and it is not altogether clear why he would have bothered, given that firstly, he didn’t know who would be assigned the case, and secondly, he supposedly cared enough about the book to make sure it would not fall into the wrong hands.

While the primary focus is on the case, there is plenty about the friction between Persis and well… just about everyone. Her relationship with Archie Blackfinch is barely off the ground because she worries that a relationship with an Englishman would not be acceptable to friends and family; she can barely speak to any of her colleagues who one way or another are unreliable, and she is abrasive to pretty well anyone she meets.

Of course, as an intelligent and ambitious woman in a male-dominated society, Persis is in a difficult position, and those around her seem dedicated to making her life difficult. She is always at odds, even with those with whom she might find common ground if she exercised a little more patience. The resultant undercurrent of conflict is very much in contrast with Khan’s Baby Ganesh Detective Agency series, where the characters tend to be adorable. You pays your money and takes your choice.