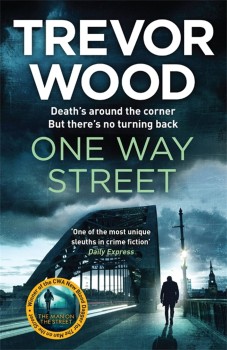 Homeless veteran Jimmy Mullan doesn’t have many friends, so when one of them goes missing, Jimmy doesn’t sit around doing nothing, he goes looking for young Deano.

Former soldier Jimmy Mullen is out of prison on licence, off the streets now and living in a hostel with his canine companion, known only as Dog. He’s got a girlfriend now as well and spends quite a lot of time at Julie’s house, even though he’s meant to be staying at the hostel. Things are looking up for him and Jimmy is doing his best to stay out of trouble even though that doesn’t always work out too well.

When his friend Deano goes missing while looking for the younger brother he hasn’t seen in years, Jimmy turns to DS Andy Burns, the only cop he trusts, to ask for help. Then Deano turns up with a convoluted story about how he’d gone off with a girl, been thumped on the head, locked up and finally let out, before going on a bender on spice, the new drug doing the rounds in Newcastle.

Deano’s search for his brother doesn’t end happily. Burns has bad news. Ash was found dead of hypothermia in a large rubbish bin, probably because of a drug overdose. Then other local kids start turning up dead as well and Jimmy suspects there’s a connection to a bad batch of spice doing the rounds, but the police are under-resourced and don’t seem that interested.

When Jimmy starts to get too close to whatever’s going on, someone tries to warn him off by threatening his daughter Kate, but Jimmy is determined to carry on, even though he’s putting his relationship with Julie at risk. Helped by Deano and their friend Gadge, Jimmy’s enquiries take him deep into the dark underbelly of Newcastle where the homelessare no more than fodder to line the drug dealers’ pockets.

Second novels, as Trevor Wood comments in his Acknowledgements are hard, often far harder than debuts as there’s more pressure to perform, and often in a shorter period of time to work in, but he need have no concerns for his finished product. One Way Street is every bit as good as the excellent The Man on the Street. The only question I asked when offered a review copy was whether Dog made it to the end credits, and the fact that I started reading at all probably gives away the answer. Wood cleverly refrains from falling into the trap of mistreating or killing off animals for a cheap emotional punch. The punches he throws have no reliance on that sort of device.

The writing comes from the heart and features a marginalised section of society that usually only turn up in fiction on a coroner’s slab. Here the homeless community is at the heart of the book, making it grounded – albeit grim – reading at times. Wood’s description of the shit life Deano and his brother lead is heart-breaking in its intensity and hopelessness, but despite his background and the pain of losing the brother he’d hoped the reconnect with, Deano is an essentially cheerful lad, who gets a chance to put his lock picking and twoking skills to use as they home in on those behind the deadly drugs. I particularly like the equally cheerful Gadge, who’s unlikely computer skills also come in very handy. There’s also DS Andy Burns, a copper with a heart, who sticks by Jimmy and does his best to do the right thing despite Jimmy’s unfortunate tendency to withhold important information.

There’s a trail of red herrings that stink as badly as week old fish and do a skilful job of obscuring what’s really going on. Wood excels at misdirection although he stops short of being actively misleading. The writing is down to earth and is a skilful reflection of the lives led by Jimmy and his few friends. The speech is redolent of the north-east without being impenetrable and the final confrontation scenes and the inevitable explanations are superbly handled, with an ironic comment from one of the bad guys that he’s not going to provide any convenient explanations. That in itself makes a refreshing change!

There’s a suggestion at the end that we might be seeing more of Jimmy and his friends, and I very much hope we do. All I ask is that Dog gets the comfortable home he now needs as he’s getting on a bit and that he lives to a ripe old age, well beyond the end of the series. Crime fiction doesn’t need any more pets going to an early – or late – grave in the name of upping the stakes. Good writers don’t need that sort of emotional manipulation, and Trever Wood is a very good writer indeed!