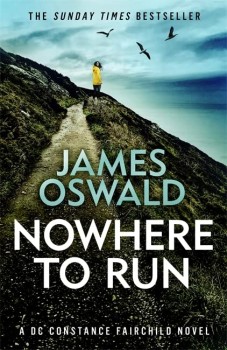 DC Con Fairchild is on compassionate leave, holed up in a remote cottage on the Welsh coast, but that doesn’t stop her getting drawn back into her old job when she tries to help a young woman she suspects of having been trafficked into drug-running and prostitution.

DC Constance Fairchild is on compassionate leave from her job in the Met following the traumatic events that culminated in the death of her mother. She’s gone to ground in a rented cottage near Aberystwyth and has pretty much stayed off the grid since getting there also, surprisingly for Con, she’s managed to stay out of trouble, but all good things come to an end. A run in with two wannabe rapists ends up with Con in the cells of the local nick, having more than held her own against two local thugs.

She’s dumped in a cell with Lila, a young Ukrainian woman forced into drug-running and prostitution by her abusive boyfriend. She managed to run away but ended up in custody due to another excess of unsympathetic local policing. Con’s been a copper long enough to recognise the signs of a county lines operation and wants to help. Her own release isn’t long coming, thanks to an old, respectable family friend, Lord Caernant, but it’s not long before word of Con’s whereabouts becomes known despite her best efforts to hide away.A visit from her old boss, Diane Shepherd, draws a reluctant Con back into the world of drug smuggling and people trafficking.

This is the third outing for Con Fairchild, set in the same world as James Oswald’s Edinburgh based Tony McLean series. There’s a very loose but welcome overlap between the two and a dash of Oswald’s own brand of faint but always enjoyable woo-woo. As ever these aspects of the books could be read two ways, either as the occasional product of a stressed mind and injured body, or something more, something otherworldly, sometimes helpful, sometimes dangerous. In this case the strangeness comes courtesy of a supposedly ancient relic held in the vaults beneath Plas Caernant, home to Gareth Caernant and his wife Amy. The old wooden bowl is said to be the fabled Holy Grail, and to be allowed to see and drink from it is a special privilege. Con isn’t convinced, but doesn’t want to offend her friend, and maybe, just maybe, there’s something in the stories …

Con’s attempt to help Lila brings her up against the local bad guys again and despite her reluctance to get drawn back into police work, it’s not in Con’s nature to avoid trouble. As a character, I like her a lot and she’s growing in depth and complexity, establishing her as a worthy protagonist in her own right, with this series definitely not just riding on the coattails of Oswald’s other success. I like the sense that these books are set in a wider context, and on top of that, the story is well grounded in current events as COVID-19 has now hit the UK, and as this will become increasing hard for writers to ignore, Oswald has gone with the flow and simply brought the pandemic into the background, without making a feature of it.

I thoroughly enjoyed this tale of rural skulduggery set on a rugged coastline with convenient clifftops to chuck people off and even more convenient secret tunnels and caves. I half expected grown up versions of pesky kids like the Famous Five to turn up and help solve the mystery. In this instance, Timmy’s job has been taken by a hairy deus ex machina in the form of a large elderly deerhound called Gelert (naturally) with a good line in weapons-grade farts (equally naturally).

If you like your crime to come with a sharp edge of otherworldly darkness, and even some occasional light, then Oswald’s police procedurals are ones to watch out for.