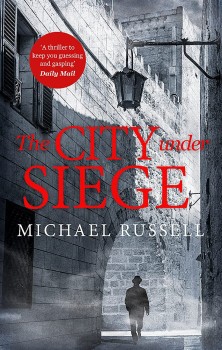 The City Under Seige

It’s 1941. More than 50,000 Irishmen have volunteered for the British forces, but Irish Premier Eamon dc Valera is clinging to his country’s stance of neutrality, choosing to largely ignore growing contacts between his G2 military intelligence operation deals which with external threats and co-operates closely with its British counterparts.

Irish intelligence is split between G2 and the Garda Special Branch, primarily concerned with the diminished, but still viable threat of the IRA its tentative and mainly ineffective links with the Nazis in Germany.

Garda Special Branch DI Stefan Gillespie is mainly employed carrying the diplomatic bag between Dublin and war-torn London. But when a famous Irish actor, Micheál Mac Liammóir, is arrested in London on suspicion of the murder of a gay man, it becomes Stefan’s job to sort out a potentially difficult and embarrassing situation.

Stefan discovers similarities with other murders in mainland Britain and Ireland, but none of these seem to have been thoroughly investigated as homosexuality was illegal at the time and there were plenty of other pressures that eclipsed these deaths. Then the report of an identical killing on the besieged island of Malta raises the possibility that the warped murderer might be a British soldier. The killings can’t be ignored any more without risk to Britain’s reputation in an island that is now playing a key part in the war in the Mediterranean and North Africa.

Michael Russell brings all his skills as a television script editor, writer and producer to the descriptions of the conditions on the island and the attitude of its people, and if you want to know more, watch the excellent 1953 British black and white film Malta Story which features footage taken at the time – some of it desperately harrowing.

Stefan treads a fine and difficult line in his sixth outing as an investigator. The British are unhappy with having an Irishman involved in what they see as strictly their business and a couple of stereotypical characters make this quite clear. Stefan is welcome only if he can prove the killer’s Irish!

There’s an interesting and convincing sub-plot involving the growing Indian demand for independence and Russell again explores the artificial sense of stability and democracy in wartime Ireland and the complexity of its divided loyalties with clarity and intelligence.
This compelling mixture of fact and fiction, features many real protagonists. Russell brilliantly portrays a world in which facts have little currency when balanced against political expediency and captures the essential truth – that in war lies and propaganda are more important – and the effects of this on the lives of those such as Stefan, caught on the edges of events over which they have no control and little understanding. This is a fine piece of historical ‘faction’ and well worth a careful read.