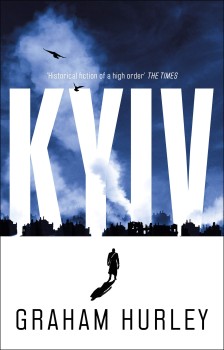 A story of love, lies and betrayal set against the background of one of the most horrific events of the Second World War.

Graham Hurley chooses one of the most horrific events of the war in Europe as the centrepiece to this grim continuation of his Spoils of War series.

Over two days at the end of September 1941, the Nazis, supported by units of the Ukrainian auxiliary police working with local collaborators, murdered around 33,800 Jews in the Babi Yar ravine, a few miles from the Ukrainian capital Kiev.

Victims were forced to give up give up their possessions and even their clothes, made to lie down on top of those already dead, then shot. The Germans undermined the walls of the ravine, burying wounded victims alive. Only 29 somehow survived.

Hurley treats this horrific massacre with as much delicacy as he can manage. But the harsh facts lend a deadly authenticity to this thriller.

Former MI5 agent Bella Menzies, a dedicated intellectual Communist who defected to Stalin’s Russia, worked with the notorious NKVD secret service and even occasionally with the mad Georgian master of all the Russians himself. She is cautiously ‘welcomed’ back to Britain as an ally while Hitler’s Operation Barbarossa sees German tanks roll into Russia. The main object of the southern attack is the Caucasus oilfields, but to reach there, the German troops must get past the city of Kiev.

Commissar Nikita Kruschev, Kiev’s political leader, knows it cannot be held, but seeks enough time for a brilliant army engineer to prepare an unexpected welcome for them. With British help the man prepares a series of electronically detonated bombs to be buried under key buildings he expects the Germans will commandeer.

Bella is assigned to oversee part of his safe return with the trigger devices, but faces a problem of her own when she receives a sudden recall to Moscow – a move which she knows can only mean someone has informed against her and she is about to be killed or, at best, sent to the Siberian labour camps

She flees to Kiev, only to realize that as the Germans close in, she will now be hunted by the two most feared police services in the world, the Nazi Gestapo and the Russian NKVD. With her chances of survival almost nil, embarks on an explosive affair with a Ukrainian activist.

Meanwhile, back in Britain, Bella’s former lover, ex-Commando and MI5 operative Tam Moncrieff is facing problems of his own. After coming back to work from injury, he is becoming increasingly concerned with the activities of one of MI6’s brightest and most valued agents – the brilliant and fast rising Kim Philby.

Moncrieff, along with a handful of others, suspects Philby may be a Soviet agent, betraying his country’s covert operations and personnel directly to Moscow. But, as in real life, Philby proves far too clever for the doubters and foils all attempts to trap him.

This book is no casual read. Hurley uses all his skills to tie his twin plots together so well that they could almost be a description of fact. His descriptions of life under occupation are superbly done, with the constant tension of trying to establish who is working for whom casting a dark shadow over the story. It’s a dark, grim and utterly compelling read and a terrific portrayal of the horrors and sadness of war behind the front lines.