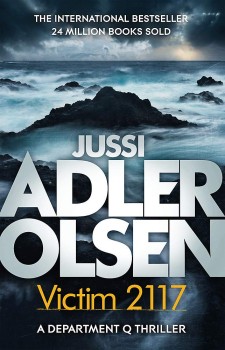 A newspaper photograph of an elderly murder victim brings back disturbing memories for Assad from Department Q. Together with his boss, Carl Mørck, he has to deal with own painful past, and stop a terrorist attack planned by his former tormentor.

Jussi Alder Olsen’s eighth novel in The Department Q series is the most heart-wrenching yet. I have read several of the books and watched films based on some of them and have always been moved by the horrible experiences that were almost forgotten until investigation by the department’s cold case division, famous for its determination and compassion as they try to uncover mysteries from their dim basement office.
Detectives Carl Mørck and Assad are fundamental in solving the cases, while dealing with various personal issues. The bond between them is strong, their working relationship is based on trust and respect even if that is not always openly expressed. Both are professional and brilliant at their jobs. There’s also some humour in their dealings. Yet their lives are far from easy. Carl admits that the women in his life have had it hard and in this latest instalment they are tested again. However, what we learn about the enigmatic Assad and his family is truly heart-breaking, with their torment at the hands of the sadistic Ghallib in a notorious prison. This unexpected new development brings an element of personal pain to the series.
The story starts with news from Barcelona of the ever-increasing number of refugees dying in the Mediterranean Sea. Catalan freelance reporter Joan writes a story and takes photographs of people who have survived passage across the sea. In addition, he becomes fascinated by Victim 2117, an older woman washed up on the beach. Joan realises that she has been murdered, rather than drowned. His boss reluctantly gives him permission to track the story back to a detention camp in Cyprus. The journalist’s hopes of uncovering the murderer’s identity turn into a relentless cat-and-mouse chase, with him one step behind a terrorist mastermind.

For a troubled Danish teenager, Alexander, who spends all his time locked in his room playing computer games, the death of Victim 2117 becomes a symbol of everything he hates in modern western society and everything he resents, including own family. He starts calling Gordon from Department Q, unveiling plans to behead his parents with a samurai sword. His murderous impulses and twisted reasoning seem like madman’s delusions not to be taken seriously until he feels ready to realise his ideas.

The most tragic consequences of seeing dead woman on a Spanish beach are for Assad who has never confided in anyone about his past in Iraq and Syria, his previous life in the military and his dangerous special missions. In addition, there are disturbing revelations about his wife and two daughters who he believes have been dead for 17 years.

The international investigation moves across borders as Carl and Assad join German police. The terrorist spared no money and effort to complete his attack. As a strategist and nomad never staying in the same place too long, Ghallib has outsmarted all who came into contact with him, and from his early beginnings as a brutal prison tormentor he becomes the ruthless mastermind behind a dangerous plot with one goal: to kill Assad.
Victim 2117, translated by William Frost, is told with flair and flows well, its intricate narrative linking all the main events in a terrifying web of past and present connections.
The story is told from different perspectives offering unique insights into the main characters’ thoughts and emotions (or lack of), all of which adds drama, and there’s enough material for two books in this lengthy story. However, the graphic descriptions of torture and humiliation were too much for me to handle. They might have been exaggerated in the name of the tension and darkness but at the same time I believe they have a basis in reality that could be happening somewhere right now. Assad’s emotional torment was hard to take in. And this affected me badly.