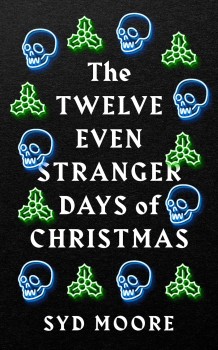 The Twelve Even Stranger Days of Christmas

A collection of short stories set in the world of Rosie Strange and the Essex Witchcraft Museum.

If anyone is expecting this collection of short stories by Syd Moore to be about Christmas or even about Rosie Strange, they are going to be disappointed. Only one story is about Rosie Strange of the Essex Witchcraft Museum and less than half are set in or around the Christmas period.

Pantomime is a nice retelling of the Snow White and the Seven Dwarfs story. Thirteen is the story of a bullied teenager on holiday in the Mediterranean. String of Lights is a tale of assumed identity before World War I. Rogationtide is set around a secretive folk tradition on a small island in the River Chelsea in Essex. After the Party Comes the Bill is the story of a man taking the last train from Fenchurch Street Station to discover the destination is not what he expected. The Over-Winter Harrowing of Constance Hearst is a murder mystery set around Adders Fork in the late 19th century. Christmas Dates is a story where a modern-day wolf sets up a date with an equally modern Red Riding Hood. The Journey of the Magi is set in an isolated Essex village with strange customs that entrap the unwary stranger. Two Minds is a little tale about the temptations offered to a police detective. Christmas Day at the Essex Witch Museum is exactly that.

If the stories in this collection have a theme, then it's a tendency towards folk horror, although only The Journey of the Magi trio of stories achieves any actual creepiness. The second story in the collection, Thirteen, has the kernel of a great premise but spends too much time on the preliminaries for there to be any real buildup of tension. The Over-Winter Harrowing of Constance Hearst starts with real horror, but then devolves into a Victorian detective story with melodramatic overtones rather than supernatural ones. I found it one of the more enjoyable stories, though.

Although I question the validity of the grouping of these stories as most are not Christmas based, nor are some of them particularly strange but I did enjoy them and they could well make a quick escape from the stresses of Christmas day!