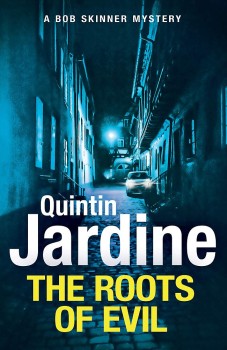 The Roots of Evil

When two men, one a serving police officer, the other retired from the force, are shot dead and left in a car outside Edinburgh’s divisional office, the investigating team has very little to go on at first and matters quickly become both complicated and dangerous.

Bob Skinner may have retired from the police, but that doesn’t stop his former colleagues from involving him when the unexpected happens. On this occasion, it’s the killing of a serving police officer who has been shot in the head and left in a car outside the police divisional office in Torphichan Place in Edinburgh. In the same car is the body of former officer Terry Coats, who left the service under a cloud.

As well as Bob Skinner, Chief Constable Margaret Rose Steele has also summoned DS Noele McClair, former wife of Terry Coats and also, unknown to her colleagues, the lover of Griff Montell, the dead officer, who also happens to have been the lover of Skinner’s daughter Alexis. Confused? Oh do keep up. This is all quite normal for the Bob Skinner books, a sprawling series spanning decades with more characters than a huge tea-party with all Rabbit’s friends and relations.

Montell joined the force in Edinburgh from South Africa, where his twin sister Spring is now in a relationship with former Superintendent Mary Chambers. (Are you still keeping up? Good. Remember that bit for later …)

Naturally, Skinner is none too pleased by Maggie Steele’s decision to call DS McClair to identify her dead ex-husband at the scene and refuses to let her anywhere near the bodies. Despite the bollocking he hands out to Steele and her former husband, Deputy Chief Constable Mario McGuire (yes, there are more connections between the characters than you’ll find in Coronation Street and Emmerdale combined!), Steele and McGuire are still keen to have Skinner’s help in the investigation, especially when it comes to light that Griff Montell might not have been quite as squeaky clean as some of his former colleagues might have thought.

In The Roots of Evil, Quintin Jardine has constructed a plot almost as labyrinthine as the love lives of his characters, with the present-day mystery stretching back into the past to the events that led to Montell abandoning South Africa for Scotland. Skinner and the others are soon up to their eyes in a complex web of stolen Krugerrands, mystery guns and airline ownership that makes the plot arc of Line of Duty look a model of transparent simplicity. And while all this is going on, Cameron ‘Grandpa’ McCullough, a man who the police have always regarded with suspicion despite his lack of any criminal convictions, goes missing, causing more complications for Skinner as McCullough is now married to the mother of Skinner’s oldest son, Ignatio. To complicate matters further, McCullough’s daughter is in a relationship with the Senior Investigating Officer looking at the deaths of Montell and Coates, Acting Detective Chief Inspector Harold ‘Sauce’ Haddock. Yes, OK, next time, I’ll draw a diagram, but for now you’ll just have to make notes.

I’ve followed the series for years (this is book number 32, unless I’ve miscounted) but of late have felt that it’s perhaps run its course, as Skinner’s transition to civvie street has always sat rather ill with him, and it’s somewhat stretched credibility for him to keep turning up as a conveniently placed mentor for various young officers as well as acting as a sounding board for his former colleagues in the command corridor. Also, I’ve never taken to any of the recent books written in the first person, as that proved very limiting in scope and lost much of the sprawling appeal of the series where spotting characters from earlier books and following the development of their careers and love lives is always been one of the pleasures that comes from sticking with a series for so long. However, I’m pleased to say that for me, The Roots of Evil represents a very welcome return to form for both Bob Skinner and his creator. I quickly became immersed in the police procedural side of the story as well in the various relationship dramas, both personal and profession, being played out in the background.

Skinner is an enduringly creation and although I have considered serving him with a divorce petition, he’s now thoroughly wooed me again. I’m even starting to warm to his spiky daughter Alex, which isn’t something I ever thought would happen. Consistent character development has always been one of Jardine’s strong suits and this very much comes to the fore here. He must either have a set of very detailed background files to keep track of everyone or an almost eidetic memory!

If you’re new to the series, there’s enough information given as the story progresses to prevent you sinking into an impenetrable quagmire, and if you’re not, then you’ll meet plenty of old friends here, although some might not be quite as friendly as they’ve led you to believe.