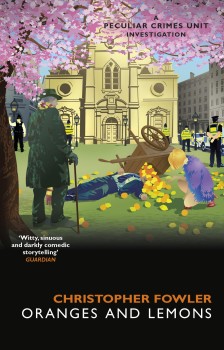 An important politician is almost buried under a crate of fruit, in a spot suspiciously near to the church of St Clements. The Peculiar Crimes Unit investigate, but now under the eye of a Home Office observer.

The Peculiar Crimes Unit was shut down following a fiasco in which Detective Chief Inspector John May was injured. DCI Arthur Bryant is continuing to write his memoires, the rest of the unit is on gardening leave and are preparing to move on. Then a very important politician is buried under boxes of fruit as he is about to cross the road. This is clearly a case for the PCU, and it’s resurrected, but this time under the watchful eye of an independent Home Office observer, Timothy Floris. They are back in their old premises, which have substantially deteriorated, but the two Daves get stuck in to sort it out, as usual. When Arthur Bryant is eventually tracked down, he soon gets diverted by a fire in a bookshop. However, they all start to focus when there is another murder, this time near St Martin’s.

As always in the Bryant and May books, there are many references to history. The rhyme about London churches is always in the background of this story, and as each church comes into focus it receives a quick potted history. At the start of the story Arthur Bryant is once again writing his memoires. and having a meeting with his long-suffering editor. Throughout the book are extracts from his walking tour guide to Peculiar London, which provide fascinating snippets of history about the city in past times. In addition to the history, there are plenty of other interesting facts such as a report about the unreliability of witnesses to crime.

The book seemingly deliberately sets out to confuse the reader and not until near the end does it seem necessary to question any beliefs about the story so far. There’s a very clever deception that is likely to trap the casual reader, but this just adds to its charm. Another diversion is the introduction of a new character to the Unit, a young woman called Sydney, who happens to have a very similar way of thinking to Arthur Bryant. The play in both language and outlook between old and young provides a rich vein throughout the book.

The whole story is fast moving but somehow appears leisurely. However, quite frequently when the characters are out and about in London, there are descriptions of their surroundings, but sometimes not quite enough detail is provided to enable a clear picture to be visualised. The focus nearly always shifts to something unusual or noteworthy which, although interesting, hampers a clear mental picture forming of what is going on. Overall, this is slightly unsatisfactory, although it does contributes to the general sense of confusion.

Oranges and Lemons is another interesting, funny and enjoyable read in the Bryant and May series.