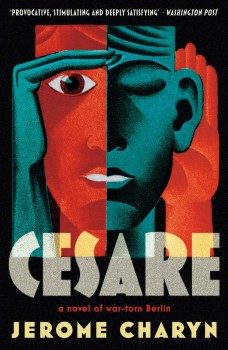 In the feverish atmosphere of wartime Berlin, a young man becomes a legend in military intelligence while pursuing his own agenda.

Erik Holdermann was orphaned at the age of nine and from then he roamed the streets of the Scheunenviertel, Berlin’s Jewish slum. He is plucked from the orphanage by a benefactor and by chance at age 17 rescues Wilhelm Canaris from a gang of ruffians. Erik is adopted by Canaris, chief of the Abwehr, who dubs him ‘Cesare’’, and the boy becomes one of his top military intelligence agents, with a frightening reputation.

Canaris is ambivalent about the Nazi regime. He helped Hitler in the early years, being instrumental in combating socialists and the murder of Rosa Luxemburg, and it was Canaris who suggested that Jews be required to display a yellow star. But by 1941 he comes to regret his support, and with Cesare’s assistance schemes to protect Jews from the gas chamber. Cesare’s reputation for sleeping in a coffin protects him, but gradually the screen around Cesare and his sponsor is eroded.

Most of the book focuses on the 1941 to 1943 period, as the war turns against the Axis, and Berlin becomes progressively more manic. Social interactions range from the politely aristocratic to the brutal. The Adlon Hotel features greatly, where SS and Gestapo rub shoulders with spies, gangsters and even rich Jews who have so far managed to hold on to remnants of their wealth.

Canaris tries to get Cesare out of the war to the US, but his protege ends up back in Germany at Theresienstadt, a phony Czechoslovakian paradise set up by the Nazis to lure credulous Jews, who find on arrival that they are merely in a way station to Auschwitz. Cesare finds a woman there who he loves, and dreams about rescuing them both.

Berlin during this period has featured greatly in fiction, with real characters and fictional creations moving together. Authors often give some background to substantiate their picture of real people; Chabon does not do so here. However, Canaris’ change of heart about the Nazis is certainly true; he did not survive the war.

Much of what happens day-to-day in the book is bizarre, with terrible want and suffering existing alongside luxury, degenerate behaviour and unrestrained use of power. Even those at the upper end of the hierarchy, like Canaris and Cesare, are so circumscribed by the Gestapo and the SS that they effectively have little room for action. Berlin comes to feel like the Titanic, with those on stage acting out a pointless minuet as the war inexorably draws to its inevitable conclusion.

While the narrative often seems surreal, the characters are well-drawn and use dialogue that feels entirely appropriate to its time. Much of it is grotesque enough to put off the squeamish, even if the beatings and murders are largely off-stage. There is humour here, but only of the darkest sort.