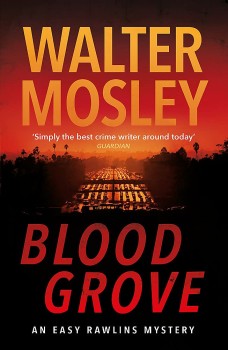 Easy Rawlins accepts a case on behalf of a Vietnam veteran against his own better judgement and soon finds himself the target of police, the FBI and organised crime.

This is the 18th outing for Easy Rawlins, once again bringing his own inimitable style to the streets of Los Angeles in the service of his family and those in need of help. Throughout the book, his pre-eminent concern is his adopted daughter Feather, whose approach to adulthood gives her father plenty of food for thought.

Easy is in comfortable circumstances, living in an unusual and beautiful home in an enclave reached only by a funicular railway. He’s even driving a Rolls Royce and has extensive offices in town which he shares with associates, but he relishes having the place to himself when the others are temporarily out of town, and therefore he’s somewhat reluctant to get involved when Craig Killian arrives seeking help.

Craig tells a story of an incident at Blood Grove, named for the oranges farmed there. While attempting to rescue a woman from assault, he fears he has stabbed and killed a man, but was knocked out by an unseen party and when he came to, he found himself alone. Rawlins suspects that Craig’s story is incomplete, but since the man is a veteran (something he shares with Easy) and clearly troubled, Easy offers to help.

Despite a circumspect approach, Easy soon comes to the attention of several parties whose focus is a recent San Bernardino raid on an armoured car. Three guards have disappeared, believed killed. The San Bernardino cops, the FBI and Eddie Brock from a local organised crime gang all suspect Easy knows more than he is saying, particularly about the money from the heist, which is also missing. Easy needs to call in a few favours to extricate himself.

The story is set in 1969, and part of LA still shows signs of the recent riots. The local police at senior level value Rawlins’ occasional assistance but that doesn’t stop frequent hassle from street level cops who either suspect Easy of having stolen the car he is driving, or just like to push him around when his colour makes them feel they can do so with impunity. Easy is the essence of cool in these situations, and his philosophical musings help him maintain an enviable balance under the most severe of provocations.

Inability to trust public institutions for justice is one of the reasons that Easy has his own well-developed system of connections bound by past favours and obligations, interesting individuals with names like Whisper, Orchestra, Jewelle and Christmas. Many of these have special skills, including a capacity for violence like his friend Mouse, but they all have in common some of the essence of cool exuded by Easy himself. This is a series that only seems to get better.