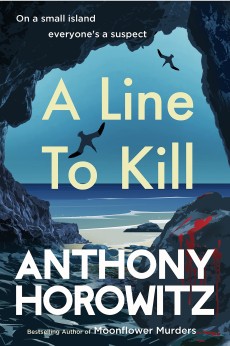 A Line to Kill

Author Anthony Horowitz and his collaborator, former detective Daniel Hawthorne are invited to a newly set-up literary festival on the island of Alderney but this is quickly derailed by the murder of a wealthy islander.

Having real people solving crime has been in vogue for a while, but for the most part, these have been historical figures with likes of Agatha Christie, the Bronte sisters and William Shakespeare fighting crime and more recently even the Queen has got in on the act, but Anthony Horowitz had gone one further and inserted himself as a character into his own books in one of the strangest twists in crime fiction that I’ve come across. And in doing so, Horowitz has created something of a reviewers’ nightmare, as the first rule of reviewing is that whilst criticism of the book is fine (providing it’s objective and constructive), criticism of the author is off limits. But when the author is also a character, that line has immediately become blurred. Help, my head hurts!

Author Anthony Horowitz is invited to the offices of his publishers Penguin Random House on Vauxhall Bridge Road to discuss his new book. The only snag is that the invitation also extended to his collaborator, former Met detective Daniel Hawthorne and it’s immediately clear to Horowitz that his publisher is more interested in Hawthorne than in him. The only problem with that – and it’s actually quite a major one – is that Hawthorne isn’t necessarily interested in them. But to Horowitz’s surprise, he does turn up, and that surprise only deepens when Hawthorne readily agrees to go to an obscure literary festival on the small island of Alderney in the Channel Islands. The man is up to something. Horowitz just doesn’t know what.

They’ve not been on Alderney long before it becomes clear that there’s a lot of tension simmering beneath the surface of what appears at first sight to be a delightful rural idyll. There are plans afoot to route a large power line across the island. The line will cut through the island’s graveyard and is opposed by many villagers, even though others think differently – notably those who stand to gain from the work. And then, naturally, things take a darker turn when the festival’s wealthy backer is murdered. The dead man has links to the company doing the work and during the police-imposed lockdown, Hawthorne does some investigating.

Anthony Horowitz (the actual author, not his fictional counterpart) has set up a classic Christie style killing with a dead body and a relatively small pool of suspects and in that respect, the book works well. I certainly didn’t guess the culprit, even though there were some clues scattered around. Where A Line to Kill will stand or fall, though, is whether readers like and connect with the main characters, Horowitz and Hawthorne, and there, I confess, is where I struggled.

Hawthone irritated me almost from the beginning, with his habit of calling everyone he talks to ‘mate’, his faintly superior view of the world and his even more pronounced habit of making himself look clever at the expense of others – usually his friend Horowitz – by plucking information and solutions out the air like a stage magician producing a rabbit out of a hat. I simply didn’t take to the man. I wasn’t particularly won over by the fictional Horowitz either, as he comes over as rather in awe of Hawthorne, putting the man on a pedestal and sitting at his feet like a rather needy spaniel waiting for him to dispense pearls of wisdom.

The character of Hawthorne feels like he has been built up around a series of deliberate idiosyncrasies rather than emerging more organically. He only drinks water, he doesn’t eat in front of other people, he’s an astute people watcher and he’s good at working things out. Throw all this together, mix well and serve with a slice of lime and a flourish for maximum effect. I just found it all hard to swallow.

I think my problem was I just that couldn’t warm to the central conceit and, to be fair, that might just have been me. My sister-in-law absolutely loves the books, which is how I found out about them, so mileage clearly does vary widely. It might also be that even without the added reviewing complexity of an author strolling through the pages of his own book, scavenging crumbs from the table of his protagonist, I’m just not that gripped by whodunnits and the well-worn literary device of the police asking for help from a civilian consultant isn’t one I find very convincing. But despite all that, I might still be tempted to see what (fictional) Horowitz and Hawthorne get up to next time.