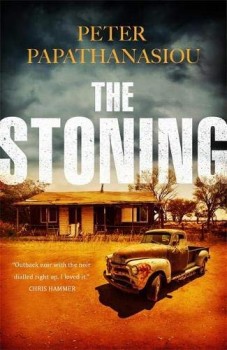 Detective Sergeant George Manolis is sent back to the outback town where he grew up to investigate the horrific murder of a popular local schoolteacher.

Detective Sergeant George Manolis is sent to the outback town where he grew up to investigate the horrific murder by stoning of a popular local schoolteacher found taped to a gum tree.

Suspicion falls on the refugees housed in a secretive new detention just outside the town that is already causing tension in the community between locals and those who seek to make a new life in Australia.

Manolis, still grieving the recent death of his father, soon realizes that the township is not the same place he left to pursue his police career. It’s now a run-down mess with nightly drug deliveries announced by fireworks! This sort of depiction of small-town Australia has rightly become known as Outback noir, and with good reason. As the ghosts of Manolis’ past begin to intrude into his present assignment it is difficult to imagine anything much darker or grimmer.

The small police force of the township of Cobb comprises a drunken, bullying senior sergeant prepared to bend or break any rule who sees his job as an interruption to his drinking; a despised indigenous constable, who must also bear the weight and stigma of his homosexuality in the face of a largely white and ultra-conservative racist population; and a woman officer, who has learned to face down similar antagonism, but who sees little hope for a future in the force.

Cobb and its inhabitants provide an atmospheric, gritty, menacing background with a wonderful sense of place for Papathanasiou’s excoriating condemnation of prejudice and institutionalised racism.

George Manolis himself is a good man struggling to do what he believes to be right in a series of increasingly bad situations. Cleverly and sympathetically written, he comes across as typical of modern life, yet still trying to maintain those values of past popular detectives going back to Raymond Chandler’s iconic Philip Marlowe.

As Monolis uncovers the rotten and long-buried secrets of a town in the final stages of physical and moral decay, he is forced to recognize that his own ‘golden past’ is little more than wishful thinking – and that truths nearer home can sometimes be as difficult as those he must face in his job every day.

This is an assured debut that marks Papathanasiou as a name to watch in what is becoming an established and popular sub-genre. The promised series featuring Manolis should be interesting.