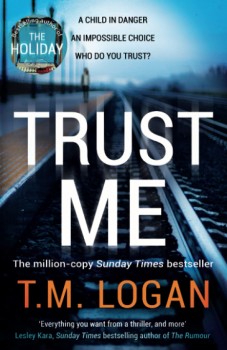 Kathryn leaves her baby with a stranger on a train for a moment, ostensibly to take a call. She then disembarks and disappears. leaving the stranger to look after the baby and establish what has just happened.

Ellen Devlin is feeling down following the break-up of her childless marriage. Her pain is heightened when she receives the news that her ex-husband is about to become a father with his new partner.

She meets a woman on a train. Kathryn Clifton needs to take a call and asks Ellen if she would mind looking after her baby, Mia, for a minute. Ellen continues to be in care mode as the train stops at a station and, unknown to her, Kathryn gets off the train and disappears, leaving her to look after Mia. Kathryn also leaves a rucksack behind, containing a message to Ellen telling her not to trust anybody, including the police.

Some of Ellen's poor decision-making starts here as she doesn't know what to do and ends up being kidnapped along with the baby. She eventually ends up at a police station where she is arrested for kidnapping. When she is released, she returns home where she remains, alone and afraid. Ellen is pretty much a loner and really only has one friend, Tara, with whom she has occasional contact.

There is a reasonably small cast of other main characters. Dominic Church is Kathryn's ex, an ex-con who may possibly be Mia's father. Leon Markowitz is IT savvy and Ellen believes he stole her details on the train. He is an ex-journalist and hacker, who has spent time both in jail and in a psychiatric unit. He is a true crime fanatic with ambitions to promote his own podcast. When Ellen visits Kathryn's home, she also meets Max, who claims to be Kathryn's boyfriend, but he denies any knowledge of a baby. And then we have the policemen, Gilbourne and Holt, with Gilbourne being the elder and the boss. There are cameo roles for Tara and Kathryn’s mother, Angela.

Halfway into the book, a murder occurs and the police consider a link to the serial killer known as The Ghost because s/he leaves no evidence behind. Both Leon and Dominic have previously been hauled up by the police in respect of these crimes. There is a suspicion that The Ghost is hunting Mia because the baby is his and he does not want that truth exposed.

More problems occur for Ellen as her home is broken into and she is kidnapped again. These and other events persuade her to take the DIY policing route, rather than turn to the police or others for help.

A lot of obvious questions are not asked at appropriate times, which is part of the pattern of holding back information from readers to keep them invested in the tale.  The use of techniques such as “I’d tell you, but you wouldn’t believe me, so I won’t tell you” and “You don’t know what’s going on, so I can’t explain” can be frustrating, but it is a prop in widespread use in crime books. A late twist is unsurprising, given prevous events.

This is probably more thriller than mystery and has many of the ingredients of today's psychological thrillers - a somewhat outlandish plot, poor decision-making by an often friendless protagonist, the withholding of information from the reader and mixed first and/or third-person accounts. Only multiple timelines are missing. The story is told mainly in the first-person by Ellen, but there are some third-person chapters that cover specific individuals.

Some believe that authors have an obligation to play fair and not mislead with their portrayals of characters. As a generalisation, I think that's a reasonable position, but I am not convinced that expectation is met here.

Those in search of page-turning qualities - pace, excitement and a thriller that eventually delivers an answer – are likely to find that Trust Me will float their boat; however, for those who need a vein of reality running through a book, the level of satisfaction might be more subdued.