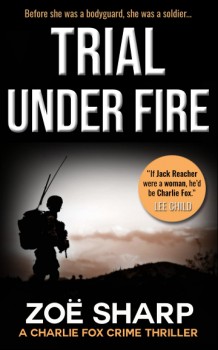 A prequel to the Charlie Fox series takes Charlie back to the tour of duty in Afghanistan that earned her the chance to undergo the gruelling Special Forces Selection process.

Anyone who has followed the story of former soldier turned bodyguard Charlie Fox is likely to have felt curious about how she got the opportunity to try her hand at the gruelling special forces Selection course, but that curiosity won’t have been satisfied, as Charlie is notoriously close-mouthed about that part of her career, which ended in her exit from the military after a vicious rape by four fellow squaddies. In Fox Hunter we learned more about what happened to Charlie and how things played out for her in the military, and now in Trial Under Fire, a prequel to the series, we finally find out how Charlie got to undergo Selection.

This much younger, less experienced Charlie is on active service in Afghanistan, but female soldiers aren’t meant to get involved in combat situations and so her job should be relatively safe, if anything can be considered safe in a world of Taliban snipers, roadside bombs and often hostile locals. A supposedly routine patrol unexpectedly goes to hell when snipers bring down a helicopter and Charlie’s patrol have no alternative other than to engage the enemy. As one of the best shots in the unit, Charlie is thrust in the middle of a sharp, brutal firefight.

It quickly becomes clear that the men in the helicopter are far from being regular soldiers and Charlie is soon caught up in a special forces operation to capture a high value Taliban target and rescue a group of hostages. With the deaths of their officer and several of their comrades, the remaining SF soldiers are in desperate need of someone capable of providing good, long-range fire. While the operation is in progress, Charlie never learns the real names of the soldiers and instead, names them after the Spice Girls, with the gruff, laconic sergeant naturally being dubbed Scary, along with Posh, Ginger and Sporty.

Charlie is tested to the limit and is never sure where she stands with the men, especially Scary, someone not exactly noted for his people skills or his tolerance for what he sees as occasionally inconvenient morals and often superfluous rules of engagement.

Pulling off a younger version of an established character is something that can be met with varying degrees of success, and I’ve rarely seen it done convincingly. All too frequently it’s a case of an old head on young shoulders, but in Trial Under Fire, Zoë Sharp has taken her kickass protagonist back to a time before many of her formative experiences and relationships. This Charlie is still competent and inventive, but she hasn’t yet acquired her flint-hard edge and the font of hard-earned knowledge that I’ve come to associate with her. Charlie has yet to kill and grapples with the enormity of that prospect in the face of some excoriating criticism from Scary, who definitely needs a few lessons in charm.

The action scenes are slick, edge-of-the-seat stuff with realistic but not over-done detail. The stakes are high, and the odds are definitely stacked against Charlie and the others as they struggle to extricate themselves from deep in hostile territory with a bunch of civilians in tow. The stark choices often facing soldiers in this sort of situation are thrown into sharp relief when the need to win hearts and minds comes into conflict with the imperative to get the job done.

Sharp is a welcome female voice in the male dominated world of military thrillers and in Trial Under Fire, she once again amply demonstrates that she can more than hold her own in that testosterone-fuelled world. And for anyone who knows Charlie, there are no prizes for guessing the identity of Scary Spice …