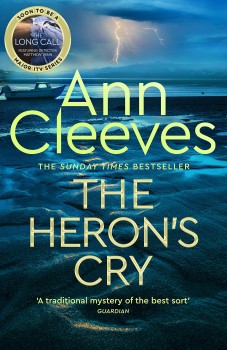 Dr Nigel Yeo wants to talk to DS Jen Rafferty at a convivial party. Hours later he is found dead, a shard of glass sticking from his neck. DI Matthew Venn and his West Country team investigate.

This is the second of Ann Cleeves’ Two Rivers series featuring DI Matthew Venn, set in North Devon. In it she evokes a strong sense of place reflecting her knowledge and love of the local wildlife, as in her two previous series - Vera and Shetland. This time police HQ is in Barnstaple where the two rivers, Torridge and Taw, meet and where Matthew Venn and his husband, Jonathan Church, live in a remote cottage on the sand dunes overlooking the estuary and Bideford Bay.

The story opens at a house party where DS Jen Rafferty (a member of Matthew's local investigative team) is more than a little tipsy. She is collared by Dr Nigel Yeo who it seems wants to tell her something important – but at the last minute he changes his mind. When Dr Yeo is later found with a glass shard sticking out of his neck, a murder enquiry begins. Although DI Matthew Venn is himself a straight-laced character – the product of a strict religious upbringing that he has only partially shaken off – his social circle, and the background setting for the drama, is the lively Arts scene in the Barnstaple/Bideford area.

Matthew's husband, Jonathan, is an altogether more laid-back and sociable character who manages The Woodyard, the local arts centre. The murder victim is discovered by his daughter, Eve Yeo,  in her studio at nearby Westacombe and the murder weapon is a fragment of one of her own artistic glass creations.

The third significant location is the waterside Sandpiper Public House. Run by the Mackenzie family, the matriarch is something of a celebrity having once starred in a soap opera for many years. The pub hosts musical evenings and plays put on by touring companies. These three venues – Westacombe, comprising a Manor House and farm owned by a local philanthropist with its two artists' studios; Jonathan's Woodyard arts centre and the Sandpiper Pub - become intertwined in a developing triangle of  murder and suspicion. Oh and there's also the possibility of some dodgy goings-on at the local Hospital Trust. A heady brew...

Two more leading characters die at pleasingly spaced-out intervals and there is a dramatic cliff top denouement in a raging storm. I did have an inkling as to who might be responsible for the mayhem but there were a couple of plot twists that I really didn't see coming. One proviso – I would avoid reading the Author's Note until after you've finished the book. To my mind it gives away too much information.

I wasn't sure about DI Matthew Venn after reading the first book in this series. He is a tad boring. But.... I am beginning to warm to him. It makes a change to have a lead detective who it takes a while to get to know. And the thawing of the relationship between him and his newly widowed and lonely mother is warming to behold. The Heron’s Cry is a rewarding mystery with an interesting and developing investigative team, great location and promise of more good stories to come.