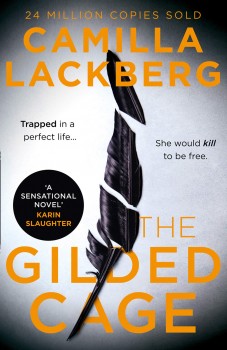 Faye Adelheim’s life is perfect. She has a handsome millionaire husband, a gorgeous daughter, a luxurious home in the best part of the city and connections to all wealthy and powerful people. When the illusion of perfection falls apart, she is ready to kill to protect what she values most.

Camilla Läckberg’s The Gilded Cage, in Neil Smith’s smooth translation, bears all the hallmarks of the style that made her an international best-seller who keeps delivering books famous for both thrilling and chilling her readers. The latest tense and fast-paced psychological thriller has intrigue, some appealing domesticity mixed with a horrendous past, huge wealth and ruthless businesspeople who will do absolutely anything to protect their status quo. Including, of course, the main character Faye Adelheim whose glossy life seems perfect.
She lives in an elegant apartment in the most exclusive part of Stockholm, is married to a very handsome and charming man who works extra hard to give her everything she wants and needs, and she adores her small daughter Julienne. Faye lunches with other rich wives, has connections with the most influential people, and owns an excess of top-quality stuff. It is easy to be jealous, and sometimes suspicious, of such a lifestyle.
However, this is all a façade. Faye has completely reinvented herself and created a new identity after escaping her dramatic childhood and teenage years characterised by brutal violence at home, resulting in her brother’s suicide and then the imprisonment of her father for murdering her mother.
Although she had not completed her MBA studies at Stockholm School of Economic to support her husband, Jack, it was her genius that established Compare, a successful empire that Jack and his best friend Henrik launched. The men quickly erased any mention of her huge role in the venture. Over the years she succumbed to the role of a compliant silent trophy wife to fit the whole concept of male domination and her husband’s wishes, because she loved him so much and he needed her.
Unfortunately for Faye, that scenario does not survive for ever and she is dumped, divorced, and stripped of all material possessions and the sheen attached to her position in society. Her initial disbelief, shock and despair turned to anger and fury. Faye begins planning her spectacular revenge, using all her forgotten entrepreneurial skills and the immense wealth of dark emotion, rage and fierceness that she had tried to conceal from the apparently sophisticated world she came to inhabit. She was ready to retaliate, in the name of all women used, rejected and scorned. And then she finds herself at the police station, shocked and distraught at the news that her ex-husband Jack has murdered their daughter.
Läckberg honed her terrifically engaging style on the detective series of books set in an idyllic fishing village Fjällbacka on the west coast of Sweden. Here, with a nod to the famous location, Faye wants to forget that place, focusing on the possibilities in the capital. The Gilded Cage is about betrayal on many levels in urban environment with greed, and sex used as a powerful tool to manipulate and exert control, and as a result, many characters seem to be one dimensional, and various cliches abound. If you can suspend belief and follow the clever but not mind-bending plot, this novel is a brilliant way to escape reality and enjoy the slick girl-power story of women of various ages working together.